1,500 Leinster flags stuck outside the turnstiles ahead of province’s win at The Rec 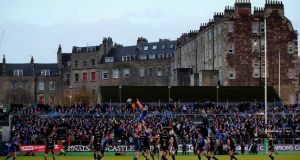 “They are saying that the flags failed a health and safety test,” tweeted the Leinster Supporters club. “These flags have been passed as safe by airports and stadia all over the world. We would like to apologise to supporters for this disappointing news. We did everything we could to get the flags from Bath but they wouldn’t release them.”

What made the confiscation seem unnecessarily petty was the sight of similar Bath flags in every other seat around the joint.

What the club’s non-playing staff may, or may not, glean from this grippingly tense European battle is you cannot engineer ambiance.

Hopefully ignorance is not bliss. For the entire afternoon the man in possession of the loud speaker incessantly commanded: “LET’S BE OUR 16TH MAN, COME ON YOU BATH!”

A wonderfully honey-coloured stone city, Bath is synonymous with rugby but such childish cheerleading even managed to surpass the ultra-annoying PA guy at the RDS, who rarely knows when to press mute (ideally, he sticks to vital statistics at the Aviva stadium next Saturday but that’s as likely as the dousing of idiotic pre-match flames or silencing of the ridiculous half naked drummers we are currently forced to endure).

Sport creates its own mood. The truly compelling contests, like Saturday at The Rec, suck noise into a vacuum that explodes when Sam Underhill soars over James Lowe or Jordan Larmour scampers away from Joe Cokanasiga.

Natural sounds are guaranteed by trusting people with their flags while shutting up and letting the real atmosphere breathe.

“We’ll go full metal jacket, yep, why not?” Todd Blackadder promises the strongest Bath team will be sent to Dublin.

.@leinsterrugby supporters: We brought 1500 flags over today’s game and @bathrugby are refusing to let us distribute them. They are saying that the flags failed a health and safety test. pic.twitter.com/wNxZxMfTey

37% - of Tier 2 players (aka The Pacific Islanders) surveyed by the world players association felt pressure by clubs not to play international rugby.

Brian O’Driscoll spitting in the soup

The cycling fraternity have a name for Brian O’Driscoll’s act of bravery. When a member of the peloton lifts the lid on drug taking, he is “spitting in the soup.”

When somebody speaks out in any walk of life, when they go against the grain, it tends to be compartmentalised as an isolated incident.

The show must go on.

Last week O’Driscoll reopened an important debate about the abuse of prescription pain killers in rugby, stating it was “usually the older players” in Leinster and Ireland who did so up until he retired in 2014. Within 24 hours Leo Cullen, the Leinster coach, categorically stated such a problem, which he was totally unaware of despite being O’Driscoll’s teammate, does not currently exist.

“I’d definitely say it’s been an interesting last couple of days,” said O’Driscoll on BT Sport. “Comments that I probably wasn’t expecting to land quite like they did. I’ve had some interesting conversations with some ex-colleagues. They were not mincing their words in suggesting what I was saying about pain killers and anti-inflammatories being taken at will five, six years ago is certainly not the case anymore.

“That’s good to hear because the piece was about player welfare and about safeguarding ‘cause the individual sometimes needs to look after themselves and they are not always best equipped to do so. It’s a good news story ultimately if we are bringing more attention to it.”

Dean Richards on integrity in rugby

Former Harlequins boss Dean Richards, currently running the show at Newcastle, spoke this week about integrity in rugby. The legendary Leicester Tigers and England number eight was annoyed with European Rugby after his current charges were forced into the potentially dangerous scenario of asking loosehead props to temporarily play tighthead due to an injury crisis.

“For the integrity of the game and the competition the boys said ‘Look we’ll give it a go’, and to be fair to them they stuck at it,” said Richards.

“It’s not like playing a left wing on the right wing or an inside centre at outside centre. There is a safety issue there and they weren’t prepared to address it so I was particularly disappointed with it.”

Point well made. Just one problem. This is the same Dean Richards who, in 2009, received a three-year ban from coaching in European competition for having “central control of everything that happened,”according to the ERC (former governing body of Heineken Cup), when fake blood was used by Harlequins to allow temporary substitutions.

The BBC reported that Richards was found to have been involved in “four similar incidents.”

Despite his past, some observers, including The Times columnist Stuart Barnes, feel Richards is the ideal candidate to succeed Eddie Jones as England coach.

“The case for the former Lions number eight is too significant to dismiss,” wrote Barnes. “He and Stuart Lancaster could be a dream team.”