Johnny Sexton will go to Portugal with the Irish squad on Monday, Dan Leavy will not

Johnny Watterson at the Ricoh Arena 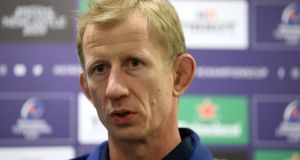 Leinster head coach Leo Cullen played in two European all-Irish games - the 2009 semi-final win against Munster and 2012 final against Ulster. His third, as a coach, against Ulster at the end of March in Aviva will probably arrive packed with more Dublin accents than either.

“It always is an extra challenge,” he says. “We say it all the time. Definitely.”

“We saw it with Bath with Girvan (Dempsey) knowing us well, seeing them read certain things that we do. It’s a tricky challenge,” said Cullen. “Sometimes you can get side-tracked by some of that worry. We just need to be clear on what we’re doing.

“But, yeah, they are different. You could see it over Christmas, those derby games take on a bit of a life of their own.

“I remember Ulster winning their quarter-final against Munster away at Thomond. They’ll get a lot of confidence from knowing they’ve done it in the past. There’s some of those faces still knocking around. They’ll know they can do it if they come with the right plan.”

Cullen’s challenge is as it always has been at this stage of the year with a mass of players going into a Six Nations Championship and not knowing how they will come out the other end for the quarterfinal.

“It’s about trying to prepare as well as we possibly can given the constraints, which is not having access to the players for eight of the next 10 weeks,” he said.

“It makes it tricky, it’s trying to get everyone back together on the same page, be nice and clear what it is we’re trying to do. Last year the players came off the back of a Grand Slam. You’re wondering how is the motivation going to be for some of those guys coming off that high. But they applied themselves really well.”

Cullen added that Johnny Sexton has been running and will go to Portugal with the Irish squad on Monday, while Dan Leavy will remain behind to rehab his injured calf. Jack Conan’s neck/shoulder injury was not good enough to play on Sunday, while outhalf Ross Byrne took a head knock and is unlikely to play next weekend in the Pro14.