All of the Irish provinces are through to the last eight but who will they play? 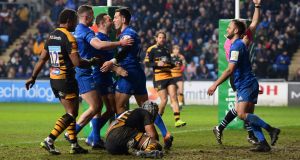 Three Irish sides in the knock-out stages of the Champions Cup for the first time ever and all three will be reasonably content with how events panned out on Sunday.

The Leinster-Ulster quarter-final will be a guaranteed sell-out at the Aviva on the final weekend in March, and if Munster had to be consigned to an away quarter-final, they’d assuredly have chosen Edinburgh, not least as Murrayfield will be able to cope with as many Munster supporters as possible.

Leinster’s 37-19 win away against Wasps secured a home quarter-final and a third-placed ranking. With Toulouse failing to register a bonus point in their 20-17 win over Bath, Ulster finished above the French team as the sixth-ranked side and rather than Toulouse, Dan McFarland’s team will head to Dublin.

Television will dictate the kick-off times, and BT Sport will presumably want to show the sole Premiership representatives, Saracens, in their home quarter-final. Leinster will push for a 5.30 kick-off.

Looking further down the track, as the top two seeds, Saracens and Racing would have home country advantage in the semi-finals. And as things have transpired, the winners of the Leinster-Ulster tie are in opposite halves of the draw from Munster.

Connacht sealed their place in the last eight of the European Challenge Cup with a 33-27 win away to Begles-Bordeaux on Saturday, and in so doing earned a tricky quarter-final away to pool rivals Sale Sharks.

Were Connacht to beat Sale, they would either be away to La Rochelle in the semi-finals, or at home to Bristol.