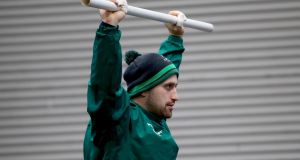 Caolin Blade, the uncapped 24-year-old Connacht scrumhalf, is set to be included in the Irish squad for their defence of the forthcoming Six Nations when it is announced on Wednesday.

With the desperately unlucky Luke McGrath joining Kieran Marmion on the sidelines, Blade seems a likely inclusion along with the fit again Conor Murray, who missed the November tests with his neck injury, and John Cooney.

Blade has played in every one of Connacht’s 18 games this season, starting half of them, making light of Marmion’s absence with his consistently good form. A smart player and a good manager, he passes accurately. Fittingly, it is Blade’s running game, especially his speed off the mark, and ability to spot and exploit a gap around the ruck which has always caught the eye. He also runs good support lines.

His kicking game has improved, but this will undoubtedly be the aspect of his game which Joe Schmidt will demand further improvement.

Somewhat similarly to the John Muldoon route, Blade comes from a GAA heartland in Monivea. He went to school in Presentation College Athenry and played both gaelic football and hurling, but followed both his father Pat and brother, Darren, in playing scrum-half for Monivea. Indeed his brother still plays for the junior club.

Although he only started playing scrumhalf at 17, Blade represented the Irish under-18 clubs and under-19 sides, as well as the Connacht Eagles, whereupon he was brought into the Connacht academy in 2014.

His eye-catching, two-try performance in Connacht’s 29-27 Challenge Cup win away to Bayonne in December 2014, as part of a very young, experimental side, was something of a launching pad for his career with the province. Despite Marmion’s presence, he has played 82 games for Connacht, scoring a dozen tries.

Otherwise – such is the enviably settled nature of the Irish squad compared to some of their counterparts – there are unlikely to be too many surprise inclusions among the 37 or 38 players named on Wednesday, ostensibly for the first two rounds against England and Scotland. More, it will be a case of who misses out.

For example, if there are three hookers then such is the form of Rory Best, Niall Scannell and a revitalised Sean Cronin, that Rob Herring may miss out.

As another example of the established order, the six props could be the same as was the case for last season’s opening two matches. Despite Jack McGrath’s surprising omission from Leinster’s matchday squad against Toulouse, and Munster’s preference for Stephen Archer in their starting lineup, both McGrath and John Ryan have remained consistent members of the Irish squad.

In light of Tadhg Beirne’s switch to Munster, the second-row has rarely been more competitive, and if there is to be a surprise here it could be that Ultan Dillane might force his way back in. He missed out on the summer tour and November series, but has been in good form this season. Word is that Iain Henderson, despite surgery on his thumb in December, is nearing full fitness and may be included.

The back-row permutations are as complex as ever, and additionally complicated by the lack of rugby for Dan Leavy and Sean O’Brien of late, as well as the injury cloud over Peter O’Mahony, not to mention the fine form of Josh van der Flier and Rhys Ruddock.

Midfield, too, has rarely been more competitive. Bundee Aki should be accompanied by the three different midfield partners he lined up with in last season’s Six Nations – Robbie Henshaw, Chris Farrell and Garry Ringrose. If there is to be a fifth, which there wasn’t at the same juncture a year ago, Stuart McCloskey would appear to be ahead of Rory Scannell and Sam Arnold in the pecking order.

Will Addison’s versatility and form should see him included again. He played in three different positions in earning his first three caps last November, and can also supplement the five established outside backs who look nailed on.

As should be the case in a World Cup year, this is becoming an increasingly hard squad to break into.