Brexit unlikely to halt march to Aviva for Ulster-Leinster tie

For many fans, Champions Cup quarter-finals will be bigger than UK leaving the EU 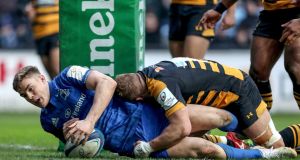 Garry Ringrose scores a try for Leinster in their Heineken Champions Cup Round 6 match against Wasps at Ricoh Arena in Coventry on Sunday. Photograph: Dan Sheridan/Inpho

Leinster will push for a 5.30pm kick-off on Saturday March 30th when they host Ulster in the quarter-finals of the Heineken Champions Cup at the Aviva Stadium.

With Ulster entitled to a 25 per cent allocation, or 12,500 tickets, it is guaranteed to be a sell-out, and an easy sell at that, as well as some occasion. Ironically, March 29th is the day when Brexit is projected to come into being, and so on the same day Ulster will be marching across the border to Dublin.

In truth, if there is to be no deal on Brexit, it could cause travel disruption for the Red Army, who intend travelling to Edinburgh for Munster’s quarter-final at Murrayfield. That seems likely to be on the Friday night of March 29th, or the Saturday.

Potential Brexit implications apart, if Munster had to be consigned to an away quarter-final, they’d assuredly have chosen Edinburgh, not least as Murrayfield will be able to cope with as many Munster supporters as possible.

The remaining two ties will see Saracens host Glasgow and Racing host Toulouse, which seems likely to be held on Sunday March 30th, at the behest of French television.

Leinster’s 37-19 win away against Wasps in Coventry on Sunday secured a home quarter-final and a third-placed ranking. With Toulouse failing to register a bonus point in their 20-17 win over Bath, so Ulster finished above the French team as the sixth-ranked side and, rather than Toulouse, Dan McFarland’s team will play Leinster in the Aviva Stadium.

Television will dictate the kick-off times, and BT Sport will presumably want to show the sole Premiership representatives, Saracens, in their home quarter-final, on the Saturday, at either 3.15 or 5.30pm.

The Leinster-Ulster quarter-final will be a repeat of the 2012 final at Twickenham, when Leinster won 42-14, and only the fifth all-Irish tie in the history of the Heineken Champions Cup.

“It should be lively, I’d say, and there’ll be a good old demand for tickets,” ventured Leo Cullen. “I’d imagine the game will be in the Aviva. If they could find a bigger stadium maybe they can put it there,” he suggested, jokingly.

As for Ulster, Cullen said: “We played them a few weeks ago when they rested a lot of their bigger-name players. They’re motoring very well under Dan McFarland so far this season and making gradual progress.”

“They had a good win yesterday,” said Cullen in reference to Ulster’s 14-13 comeback win over his other old club Leicester at Welford Road on Saturday, which to McFarland’s clear pleasure meant Ulster qualified by dint of their own efforts and without favours elsewhere.

“It’s going to be a great challenge for our guys,” said Cullen.

Over the years, home teams have won 75 per cent of the quarter-finals and, under the current format, that has risen to over 83 per cent

Speaking after their titanic, sleeves-rolled-up 9-7 win over Exeter Chiefs at Thomond Park on Saturday, which earned Munster an 18th quarter-final, Johann van Graan said: “If it were to be Edinburgh – we played them in a quarter-final here last year in the Pro14, the way they’ve improved, I think their scrum has been fantastic, they’ve got a very specific game plan that they do well and they’ve got a lot of belief.

“So if it were to be Edinburgh, that will be a massively tight quarter-final and if you look at the rest of the competition, you’ve really got to be good to win an away quarter-final, and if it turns out to be that we have to go away, we’ll take it by the time it comes around.”

Over the years, home teams have won 75 per cent of the quarter-finals and, under the current format, that has risen to over 83 per cent.

The quarter-finals are only two weeks after the conclusion of the Six Nations, meaning none of the Irish sides will play together at full strength again before the provinces are pitched into the quarter-finals in 10 weeks’ time.

As bulk suppliers to the Irish squad, the Six Nations is liable to take an altogether bigger toll on Leinster than on their rivals. There is also a World Cup on the horizon.

But the weekend was, seemingly, a very good one for Joe Schmidt. Not only did Peter O’Mahony come through 80 minutes for Munster on Saturday, but Iain Henderson made a successful, man-of-the-match return for Ulster after thumb surgery.

Robbie Henshaw, Jack McGrath and Devin Toner all returned for Leinster on Sunday, and Sean O’Brien completed a busy 55 minutes on his return from the broken arm he suffered against Argentina in November when promoted to the starting line-up after Jack Conan was a late withdrawal with a shoulder problem.

The bulk of the 38-man squad fly out for a five-day camp in Portugal on Monday morning, but it seems likely that many of those just mentioned – and one or two others light on game time – will remain with their provinces and play in the Guinness Pro14 next weekend.

For the first time ever, all four Irish provinces have reached the post-Six Nations knock-out stages in Europe

Looking further down the track, as the top two seeds, Saracens and Racing would have home country advantage in the semi-finals. And, as things have transpired, the winners of the Leinster-Ulster tie are in opposite halves of the draw from Munster.

For the first time ever, all four Irish provinces have reached the post-Six Nations knock-out stages in Europe. Connacht sealed their place in the last eight of the Challenge Cup with a 33-27 win away to Bordeaux Bègles, and in so doing earned a tricky quarter-final away to pool rivals Sale Sharks.

Sale won the first meeting last October at the AJ Bell Stadium by 34-13, before Connacht won the return in the Sportsground a week ago by 20-18.

Were Connacht to beat Sale, they would either be away to La Rochelle in the semi-finals, or at home to Bristol Bears – which would, of course, mean a return to the Sportsground for former head coach Pat Lam and John Muldoon, Connacht’s most-capped player of all-tine and now the Bears’ defence coach, as well as former player Jake Heenan.