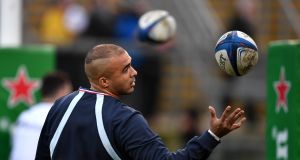 Simon Zebo: tweeted about comments directed his way from among the attendance at Kingspan Park. Photograph: Charles McQuillan/Getty Images

What Simon Zebo heard at Kingspan stadium on Saturday may become known in time. Regardless, there has been overwhelming support beneath the Ireland international’s post match tweet.

“Great to read the reply’s [sic] and that so many are genuinely concerned about racism in their sport,” stated Kerry football legend Eoin ‘The Bomber’ Liston.

Zebo, it must be noted, made no mention of racist abuse when tweeting “I hope my ears deceived me with some comments directed my way from the crowd #NotOn.”

However, former Ulster and Ireland flanker Neil Best also took to social media to state: “Racism has no place in sport and no place in any other area of life. But vague hints/suggestions [that] something may have been said does a great disservice to the many @ulsterrugby fans who were hostile not based on any player’s race/ethnicity.”

Best, capped 18 times by Ireland from 2005-2007, with a twitter handle that describes him as a “Writer, Choreographer and Artist” for rugbypass.com, added: “Complaint/Investigation/Outcome/Process.”

European Professional Club Rugby stated they had “not received a formal complaint from Racing 92 regarding any alleged case of verbal abuse of one of the club’s players during yesterday’s Heineken Champions Cup, Pool 4 match at the Kingspan Stadium” but the tournament organisers did confirm they are in contact with both clubs.

Ulster Rugby did condemn “all forms of abuse and will work with the relevant parties to robustly investigate any complaints received.”

During and after the previous fixture between the teams in October, Zebo apologised to Ulster’s Michael Lowry after celebrating with a finger pointing gesture that referee Nigel Owens felt the need to highlight. It’s unclear if this was why some sections of the Kingspan Stadium felt the need to boo the Cork man.

Either way, Zebo has started a conversation.

In the week when a fourth French player, Nathan Soyeux, died from injuries sustained playing rugby in just an eight-month period, clarity around the Head Injury Assessment process never felt so important.

Last February in Paris Johnny Sexton questioned the substitution of French scrumhalf Antonie Dupont at a crucial moment in the Six Nations game. The medics, despite clearly treating Dupont’s knee, were allowed send Maxime Machaneaud back into the game as it was deemed a HIA.

Like Owens, referee Luke Pearce sought to avoid ambiguity when it came to the removal of Toulouse’s All Black duo Charlie Faumuina and Jerome Kaino at the RDS on Saturday.

Pearce (for Faumuina sub): “Excuses-moi, is this a HIA or tactical? Hang on. We need to decide. If it is a HIA he has 10 minutes to return or he is injured? Which is it?”

Pearce (for Kaino sub): “Time off please. Sorry mate my French isn’t that great. Is he going on?”

Pearce: “I want to clear something up. Is this guy going off or not? Doctor, I really need your help here. Is this player staying on or is he going off? Number eight. Okay you’re going off. Just tactical, eh?”

It was tactical so?

The ageing Ulster men of ’99 were front and centre as Racing visited Ravenhill. It seemed to awaken something buried deep in the locals’ psyche.

Before Rory Best’s playing days are numbered, the Ireland captain would love nothing more than to taste European glory in a red hand jersey.

“The frightening thing is you don’t really want to walk around the changing room and ask where you were when Ulster lifted the European Cup [in 1999],” joked the 36-year-old. “Some boys in there weren’t born. There are boys there that have no recollection of it. I was on a bus from Portadown. I was of age to have a few drinks on the way down.”

Jacob Stockdale interrupts: “So you don’t remember either?”

Best did have a serious point: “For too many years we’ve looked back at 1999 [thinking] we have to replicate that...I think we talked about it in 2006 when we won [the Celtic League], and then 2012 when we got to finals, but it became words and not actions. We thought it would just happen and I think that’s the experience that we’re going to have to get into this team, that we don’t want to be sitting here in another 10 years introducing the spirit of 1999 again because we haven’t done anything since.

“We got to create our own legacy.”

“A tough place to play but great effort from the boys, two important points on the road. Also I hope my ears deceived me with some comments directed my way from the crowd #NotOn Django wins in the end” – Simon Zebo takes to social media after hearing something unbecoming from the Ulster crowd in the Kingspan stadium.

26 – Joey Carbery points, including two tries and a flawless seven from seven kicks, as the outhalf announces himself on the European stage (as an outhalf).