Sale too hot for La Rochelle on Curry’s return 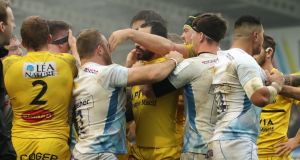 Pierre Bourgarit (left) of La Rochelle stretches to grab Tom Curry around the face and is sent off during the Champions Cup match between Sale Sharks and La Rochelle in Salford, England. Photograph: David Rogers/Getty Images

It is a long way from Yokohama to Salford, but for England’s Tom Curry the backdrop is incidental. The outstanding flanker was the deserved man of the match on his return to club action as Sale reinvigorated their European Champions Cup challenge at the expense of an ill-disciplined La Rochelle, undeterred even by the moment of madness that meant the visiting hooker Pierre Bourgarit was shown a red card for eye-gouging.

Given La Rochelle had two other forwards shown yellow cards either side of half time and were down to 13 men for 17 minutes, Sale probably should have won by a wider margin, but there was no doubting Curry’s relentless commitment before cramp crept up on him in the closing stages.

The youngster appears not to acknowledge even the possibility of pain and, typically, even shrugged off Bourgarit’s casual exploration of his eye socket at a maul in the 38th minute as one of those things. “I didn’t even know what happened . . . I just felt a hand on my face. I’m 21, I’m not a kid. I think I can handle myself.”

Europe’s disciplinary body may well take a sterner view, the episode inviting comparisons with the dim-witted elbow by Sébastien Vahaamahina that cost France dear in their World Cup quarter-final against Wales. The result is that Sale will be right back in contention in pool two if they beat Exeter at home on December 8th, by which time they might even have a surprise bonus squad addition.

The Sale director of rugby, Steve Diamond, looking to cover the absence of the injured Josh Beaumont and the Springboks lock Lood de Jager, confirmed he is in talks to sign the brilliant Fiji lock Leone Nakarawa should Racing 92 release the player, currently in dispute with the club after reporting back late from the World Cup.

“I thought there might be one or two of those locks at Saracens available, but they’re not so we’re looking further afield,” said Diamond, jokingly, unable to resist a dig at the European champions following their recent salary cap travails.

It all made for robust Sunday lunch Anglo-French entertainment, rosbif with all the trimmings. At their best Sale can make life tough for anyone, particularly with Curry back. In these parts they reckon he has returned from Japan an even better player than when he left, and their other returning World Cup hero, Faf de Klerk, also looks a man perfectly happy to be back on the relentless club treadmill.

Relocating from a raucous World Cup trophy-winning tour around South Africa to the grey, overcast northwest in late November is not the easiest of transitions: this was certainly not a day for budgie smugglers, even thermally insulated ones. De Klerk, though, is the kind of competitor who cheerfully niggles away wherever he is and he looks as chirpy beside the M60 as ever he did in downtown Yokohama.

The Bourgarit incident aside, his upbeat mood was only diluted by the decision to disallow what would have been one of the tries of the season, a spectacular 95-metre breakout off turnover ball having apparently culminated with a characteristic Chris Ashton swallow dive between the La Rochelle posts. Unfortunately for the highlights reel of everyone concerned AJ MacGinty’s shovelled inside pass to De Klerk in the buildup was belatedly adjudged forward by the TMO, despite the referee, Andrew Brace, having already allowed the conversion to be taken.

Rugby’s technology protocols have yet to reach VAR levels of dissatisfaction but there remains plenty of room for improvement.

In the event it did not matter. La Rochelle, clad in submarine yellow, disappeared under despite the presence of most of their leading names. The loss of Bourgarit ruined any hope they might have had of atoning for their heavy opening round home defeat by Exeter. Only briefly, when Vincent Rattez seized on a loose ball to dart over like a small rodent up a drainpipe, did they exhibit their customary attacking freedom.

No team coached by that redoubtable European competitor Ronan O’Gara will ever completely lie down. Sale’s third try did not materialise until seven minutes from the end, courtesy of a fumble by replacement Levani Botia that fell nicely for Ashton. Any possibility of a bonus point for La Rochelle was long gone by the time Jeremy Sinzelle scored in injury time.

“It’s pretty obvious that any time there’s a hand to the face – whether it’s a grazing or an actual jab – it’s not good enough,” said the visiting captain, the former All Blacks forward Victor Vito, lamenting Bourgarit’s early bath.

“We’ll have to look at that. If you want to be a real contender in Europe you’ve got to be a lot more efficient and we just weren’t.”