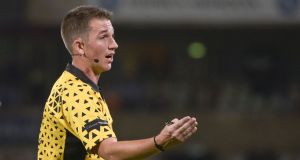 EPC Rugby has announced the referee appointments for rounds three and four in the Heineken Champions Cup.

France’s Alexandre Ruiz will take charge of Leinster’s trip to face the Northampton Saints at Franklin’s Gardens (1.0), Scotland’s Mike Adamson will preside over the game between Ulster and Harlequins at the Kingspan stadium (3.15) while France’s Romain Poite will referee Munster’s clash with Saracens at Thomond Park (5.30). All three games are on Saturday, December 7th.

Connacht travel to Kingsholm the following day to face Gloucester (1.0) and France’s Pascal Gauzere will be the man with the whistle.

The following Friday, December 13th, Ruiz will be in charge when Harlequins host Ulster at The Stoop (7.45). On the Saturday, Poite officiates at the Sportsground for Connacht’s game against Gloucester (12.45) while Gauzere will be the man in the middle for Saracens against Munster at Allianz Park (3.0).

Young Welsh referee Dan Jones has been appointed to Leinster’s home game against the Northampton Saints at the Aviva stadium (5.15).

Ireland’s Andrew Brace and Frank Murphy will take charge of the Bath v Clermont Auvergne and the Ospreys v Racing 92 games respectively in round three.