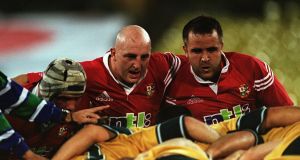 Tom Smith - pictured with Keith Wood during the third Test of the 2001 Lions series - has revelealed he has cancer. Photograph: Billy Stickland/Inpho

Former Scotland captain Tom Smith is determined to tackle his fight against cancer head on.

The 48-year-old prop forward — who won 61 international caps between 1997 and 2005 as well as touring with the British and Irish Lions — has been diagnosed with stage four colorectal cancer.

Smith has received intensive rounds of chemotherapy and is also undergoing radiotherapy after the cancer spread to his liver and brain.

“I was in my hospital bed and I said to staff, ‘I’m determined to fight this’,” Smith said on the Scottish Rugby Union website.

Smith, who played for the Caledonian Reds, Glasgow Caledonians, Brive and Northampton, now lives in the south of France.

In an interview with the BBC, the former Scotland international recalled how earlier this year continued pain in his abdomen eventually led to him seeking medical help, following weight loss, lack of sleep and passing blood.

“I played rugby for 15 years professionally. Aches and pains are part of the deal as you get older. I think I wrote it off until it got to the point that I needed to do something,” Smith said in a BBC Sounds special podcast.

“I try to get on with things and that’s probably my downfall.

“Life has changed very quickly. I want to do the right thing for my family; this all leaves you a bit exposed.

“I’m lucky enough to have a good group of friends and a strong community helping and supporting.”

A reunion lunch of Scotland’s 1999 Five Nations Championship winning team, in which Smith played, is set to be held in Edinburgh during December. The event will help raise funds for the former Scotland captain and his family, wife Zoe and three children, aged 18, 17 and nine.

There will also be a dedicated dinner, supported by close friend Shaun Longstaff and fellow Scotland winger Kenny Logan, hosted at the Hurlingham Club in Fulham during March, with proceeds set to further aid the family.

Smith added: “The uncertainty is something which provokes fear. I’d like to bring as much certainty as I can to the future of my family. That will help me.

“It’s quite daunting because some of the treatment is very unpleasant. But I’ve faced some tough opponents, and the least you can do is fight. So let’s fight.”

Scotland head coach Gregor Townsend played with Smith — who also manages epilepsy — for the Lions Test series victory against South Africa during 1997 and also at club level with Brive.

“Tom’s achievement of starting six Lions Tests in a row between that tour of South Africa and then the 2001 tour of Australia is a testament of how highly he was regarded as a player,” Townsend said on scottishrugby.org.

“Fearsomely strong and competitive, he went about his business undemonstratively, but also had an outrageous skill set.”

Townsend added: “For me, Tom is the outstanding Scotland player of the professional era and I’m sure rugby supporters throughout Scotland and the world will rally behind him and his family in these tough times.”