Captain and coach see issues despite bonus-point win over Ospreys

John O'Sullivan at the Liberty stadium 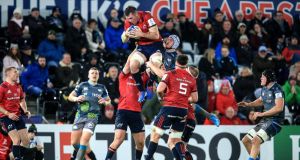 Munster’s Peter O’Mahony wins a high ball ahead of Hanno Dirksen of Ospreys during the Heineken Champions Cup match at the Liberty stadium in Swansea. Photograph: Gary Carr/Inpho

Munster captain Peter O’Mahony was reasonably satisfied as the Irish province returned home from the Liberty stadium with a four try, bonus-point victory over the Ospreys, facilitated by a grandstand finish when replacement prop James Cronin drove over at the back of a lineout maul with the clock in the red.

“Parts were very good but we’ve a lot to work on,” said the Ireland flanker. “I thought they played quite well; they put us under a lot of pressure in the first half. We got very little attacking platform – certainly lineout wise – it didn’t feel like we had a huge amount of platform.

“I thought we defended quite well but one thing for me was the discipline. Certainly away from home it’s something we’d hang our hat on but we were ill disciplined if anything. But our attack shape was good at times.”

The outcome superseded any performances quibbles.

“I certainly don’t enjoy it [doing it the hard way] at the time, but as I said already they’re a very physical side and I think you saw from their maul attack, it was very good. We found it difficult to stop. I said to the lads inside: you can never take for granted getting five points away from home in this competition. It’s a difficult, difficult thing to do.”

Munster coach Johann van Graan also brought up the issue of discipline but felt that Munster eventually wore down their opponents, even if it only materialised in a fraught end game.

“Most games are won in the second half. I thought we did some good things in the first half. Our discipline, one or two high shots were just too high. We have to get that down.

“We were pretty calm at half-time. We identified some areas of space. They started the second half pretty well but we had a nice set play from the forwards sending Tommy [O’Donnell] down the blindside with Earlsie [Keith Earls] finishing [in the opposite corner].

“I think the game changer was the try from the kick-off. We fielded it, kicked long, got that turnover. Jeremy [Loughman] made that lovely left to right pass to Andrew [Conway] from which he scored. At 25-6 we knew we needed to get one more but the Ospreys said all week that they were going to fight for this one.

“At 25-13 there was two minutes to go, we got a big poach, won a penalty, won another penalty and went to the corner: credit to the players who remained calm. It doesn’t matter when you score your tries as long as you get four.”