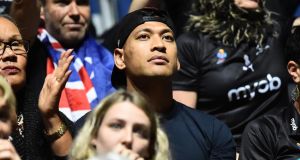 Former Wallabies fullback Israel Folau has raised his compensation claim against Rugby Australia (RA) and the New South Wales Waratahs to A$14 million (€8.6million) in an updated court filing.

Folau, a fundamentalist Christian, was previously seeking A$10 million in damages from RA and the Waratahs, who terminated his four-year contract in May after he posted a meme on social media that said hell awaited homosexuals and other groups.

The 30-year-old filed an amended statement of claim to the Federal Circuit Court on Wednesday that said his termination had denied him a chance to captain the Wallabies.

Folau, who has cast his legal challenge as a fight for religious freedom, is also seeking an apology from RA and the right to resume his international career.

The trial is set to begin in February if final mediation between the parties fails next month.

Folau caused a media storm last week when he said in a sermon posted on Facebook that recent deadly bushfires in Australia and a devastating drought were God’s punishment for the country allowing same-sex marriage and abortion.

Former fullback Folau was capped 62 times by the Wallabies and also represented Australia in rugby league.