TV View: Elephant still looming in the room as we dare to switch on . . . rugby

‘What of the World Cup,’ he asked – and Fiona and Luke both kinda looked at their feet’ 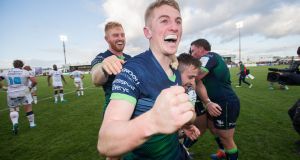 Too soon? Did we need a little more time to let the wounds heal? Is four weeks a lengthy enough grieving period? Or do you adopt the approach of those who’ve been chucked off horses? Get right back up again and canter on?

You do indeed. So, once more unto the breach, you find your inner Chumbawamba, you turn the telly to . . . rugby.

This being the club variety, though, there was the hope that events in Japan wouldn’t get a mention, it was time for us all to move on, let bygones be bygones and, as Phil Coulter once put it, acknowledge that what’s lost is lost and gone forever.

“If we just cast a backward glance to the elephant still looming in the room,” said Joe Molloy to Darren Cave and Shane Horgan a nano second in to Virgin Media’s Champions Cup coverage. So the two lads had to rake over month-old coals and relive the hurt.

And it was no better over on BT where our host Ross Harries had Fiona Coghlan and Luke Fitzgerald for company pitch-side at The Rec for Ulster’s trip to Bath.

“What of the World Cup,” he asked, and Fiona and Luke both kinda looked at their feet, like they really didn’t want to talk about it.

“Is there a danger of a World Cup hangover,” asked Ross, “or will these players be desperate to wrong some rights today?” Fiona and Luke were way too polite to point out that they’d much prefer if some wrongs were righted.

Over on Channel 4, meanwhile, Ed Jackson was chatting with Bath’s Freddie Burns about the prospect of coming up against his little brother, Ulster’s Billy, and whether he’d “keep it clean” or, as Freddie told us they did in their youth, “kick the crap out of each other”.

“I think we’ll have to keep it clean, mate, because Mum’s in the stand and she’s been on the brandy since this 9.0 morning, so any dirty tactics she’ll be straight on the pitch,” he said.

If Mammy Burns’ allegiances were with Bath, she must have been tempted to take to the pitch and give Jacob Stockdale a clip ’round the ear after his divine intervention prevented the hosts from scoring a last minute winning try.

“Ah, look at that there! Lovely,” as Stephen Ferris said of the heavenly moment.

And that set the tone for the weekend, the Irish clubs doing nothing but winning, to the point where you’d be half thinking, ‘bring on the 2023 World Cup quarter-finals’. (Too soon?)

Even Connacht prevailed, despite an injury list so long any of us might have got a place on at least their bench if we’d turned up with boots at the Sportsground.

Instead of celebrating the triumph over Montpellier, though, coach Andy Friend, being Australian, was slightly peeved about missing out on a bonus point, Ryle Nugent questioning if he was serious. (That Ryle is now on BT makes our remote control-hopping bewildering, it’d be like Niall Horan lining out for Westlife).

Seamlessly linking, will Declan Rice line out for Manchester United some day soon? Roy Keane, sitting in a studio overlooking a pitch in Kosova, all the while appearing like a man questioning his career choices, had his doubts.

Mark Pougatch told him that NATO strikes helped liberate Kosovo, hence the friendly welcome for England for their Euro qualifier, Roy’s face saying ‘and?’, preferring instead to focus on the more consequential issue of Rice’s shortcomings.

“Where does he need to improve . . . where do you want me to start,” he asked, in a revenge for Skibbereen moment. “I’ve worked with him when he was with the Irish squad (eye roll), his positional play (eye roll) . . . he doesn’t stay with runners (eye roll), he’s sloppy in possession (eye roll), I can go on.”

But Rice is lost and gone forever.

And another man, incidentally, who could have had a long and illustrious career with Ireland is Vinnie Jones, but instead he opted for Wales once he located it on a map. But he’s never forgotten his Irish roots, his granny born in Dublin, and in honour of said roots he sang an a cappella version of the Galway Shawl on Celebrity X Factor.

Sadly, his performance clashed with an interview that was taking place on BBC2, so most of the inhabitants of these islands might have missed it. Not to be too cruel about it, anyone who heard it might have wished they were in Pizza Express in Woking at the time munching on a Sloppy Giuseppe.