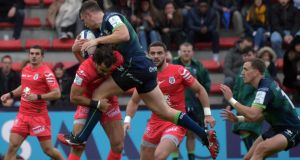 Connacht head coach Andy Friend was proud of his side’s performance despite slipping to a 32-17 Champions Cup defeat against Toulouse.

Tries from Sebastien Bezy, Yoann Huget, Jerome Kaino and Pita Ahki plus 12 points from the boot of Thomas Ramos were enough to secure maximum points for the four-times champions.

Connacht scored two tries of their own courtesy of Tom Farrell and Caolin Blade with Conor Fitzgerald kicking seven points at the Stade Ernest-Wallon.

“I was really proud of our performance,” said Friend. “I just thought the boys never stopped trying. When they got their opportunities they took them in the first half.

“I thought a lot of things were stacked against us but they stuck at our systems and believed in themselves.

“We went into the break one point down and came out in the second half and kept the pressure on.

“If you look at the 32-17 scoreline it looks like a one-sided game but it certainly wasn’t. We can take a lot of pride out of this game.

“Our back to back games against Gloucester will be pool defining. You’ve got to win your home games while you’ve definitely got to get one win away from home if not two. It’s going to be a crucial double header.”

Connacht opened the scoring with Farrell running in unopposed from 40 metres out before Bezy hit back for the hosts.

The visitors were soon celebrating their second try when a well-timed pass from Fitzgerald put Colby Fainga’a straight through a gap. The former Australian international galloped 50 metres up field before drawing in Ramos to put Blade over for the try with Fitzgerald converting.

Fainga’a was then sent to the sin bin for a tip tackle on Romain Ntamack with a Huget try giving the hosts a slender 15-14 half-time lead.

Fitzgerald and Ramos exchanged three points early in the second half before Kaino powered over the tryline from short range.

Toulouse sealed the try bonus point in the last play of the game when Ahki squeezed over from short range with Ramos converting.

“Connacht put a lot of pressure on us,” admitted Toulouse captain Jerome Kaino.

“In the first half we didn’t play the way we wanted to play and we were under pressure. But I’m proud of the way the boys played in the second half.

“We improved our game significantly after half-time and our skill levels were much better. To win at home and get the bonus points was important.

“It is great to have started the competition with two wins especially in our pool it’s important to win at home.”