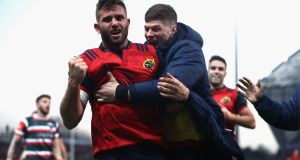 Rassie Erasmus says Jaco Taute wants to stay on with Munster after his short-term deal expires at the end of the month, but a decision will not be reached on his future until Sunday at the earliest.

Erasmus and his management team will sit down after Saturday’s Champions Cup clash with Leicester and plan the make-up of their squad for next year and efforts to keep Taute will be central to those talks.

The Munster boss insists there has been no talks with the IRFU regarding Taute’s future, but the province are clearly readying a case to put before IRFU performance director David Nucifora.

“We haven’t discussed it even with the IRFU, we’ll give it until after this weekend,” said Erasmus. “He’ll be keen to stay, he really enjoys it, I think he slotted in well, him and the players enjoy one another, he’s liking the whole set-up, so I think he would like to stay.

“If it’s allowed and fits in, it might be until the end of the season, if we look long term, we can’t make that decision today, it will be Monday or Tuesday.”

Retaining his services and Taute’s – both centres by trade – may be difficult for Munster going by Ulster’s recent failure to retain Ruan Pienaar, but Erasmus perhaps spots some wriggle room can be found.

“You see, that’s the tough thing that we must now make the calls after this weekend. There are so many things that fit in, you know, they can play in different positions as well, so we’ll have to make sure.

“There’s so many things you must think about when you must make these decisions, so I don’t want to stick my neck out there and then on Sunday we go through it as a coaching team and we say: ‘hey guys, this is not a realistic option’. So we’ll take our time when we make those decisions.

“He was one of the guys that I’d coached against for the Blues, he’s a fantastic player, totally different to Jaco, and I can’t wait to get him back on the park.”

Before any of those talks are thrashed out, Munster will hope to claim a second win in a week against Leicester Tigers in the Champions Cup.

A third win from three will leave Munster well placed in Pool One, and heading to Welford Road on the back of a 38-0 win at Thomond Park is a good place to be for Erasmus, but he is sweating over the fitness of Keith Earls.

“It’s just Keith Earls has a little bit of a groin at this stage, we’ll give him some proper stage until Friday, but I think he’ll be good to go.

“If it was a semi-final this weekend we would definitely play him but let’s just see. We’ve got Ronan O’Mahony, who’s really been playing well and who’s fit to play if we needed him.

“Andrew Conway can slot in on the wing as well so we wouldn’t risk him at this stage but if he’s fit by Friday he’ll definitely play.”