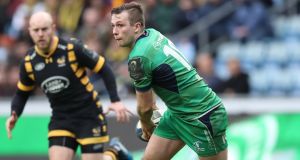 Jack Carty: Connacht’s last man standing both in the outhalf position and as a recognised goal kicker. Photograph: Billy Stickland/Inpho

While Leinster are bemoaning the latest injury to Joey Carbery, Connacht have lost their newest signing Marnitz Boshoff for at least three months.

The South African, who has made just two appearances for Connacht, had shoulder surgery on Monday after being forced off late in the club’s victory over Benetton Treviso.

It had been the first start for the former Golden Lion, who had made his first appearance after 66 minutes against Cardiff the previous week.

Boshoff’s loss is exacerbated by the continuing injury to Shane O’Leary, who remains on return to play protocols after suffering concussion in training before the Cardiff game, while Craig Donaldson, who now plays in the centre, remains unavailable until mid-January.

It leaves incumbent Jack Carty the last man standing both in the position and as a recognised goal kicker, unless scrumhalf John Cooney makes a swift recovery from a quad injury.

With no available outhalf in the Eagles squad – Carty’s brother Luke is a sub-Academy player – centre Rory Parata will be drafted into the pivotal position if necessary.

But it is far from an ideal scenario against a Wasps outfit that recorded a 32-17 bonus point win over Connacht at the Ricoh Arena last Sunday.

“Jack is the only recognised kicker still standing,” said coach Pat Lam. “There’s a few players who tried to put their hands up – Bundee [Aki] was keen until he hurt his thigh, Tiernan [O’Halloran] said he’d step up, so I just said: ‘None of you practise’, because the last time we were in this situation, they all went practising and a couple of them got injured.”

“Not sure at the moment. We will have a chat with our group today and look at options, but we are not likely to do anything this week, but just get on with it. It is what it is. That is the adversity we face and the challenge, and we just have to embrace it, and we will.”

The injury toll has also hit other backline positions, and Lam has his fingers crossed both O’Halloran and Aki are fully recovered from haematomas, hip and thigh respectively.

However wing/fullback Cian Kelleher is sidelined for a month with a torn hamstring, centre Stacy Ili is awaiting results of an ankle scan and is “unlikely” to be fit, while Peter Robb, who was originally selected on the bench last weekend, is recovering from a thigh injury sustained at training.

Up front Jake Heenan had scans on both knee and ankle yesterday and is ruled out, while prop Ronan Loughney continues rehab.

“Before last week I thought we have turned the corner in terms of injury. It’s frustrating, it has moved from the pack to the backs now.”

“This whole week is a chance to practise a bit of mental toughness, focus around prep off the field. All up we’’ll have one training session just to ensure we get bodies on the field. Everyone is on light duty.”