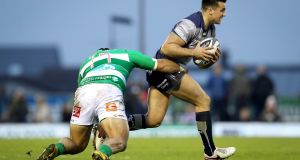 Connacht’s Cian Kelleher is tackled by Federico Zani of Treviso during their Pro12 match at The Sportsground, Galway. Photograph: Inpho

At the halfway point of the Champions Cup the rude health of the Irish provinces in the various pools is reflected in the prominence of a number of their players at the top end of the individual statistics across a multitude of categories as the the graphic below indicates.

Young Connacht wing-cum-fullback Cian Kelleher is a conspicuous presence – he’s unfortunately going to miss this weekend’s action because of a hamstring injury that will keep him sidelined for three to four weeks – across a variety of categories, making him as one of the standout attacking players in the tournament to date.

Lineouts though are the topic de jour for this week. Devin Toner celebrated on the double last Friday night, savouring Leinster’s 37-10 victory over the Northampton Saints at Franklin’s Gardens on the occasion of his 50th Champions Cup appearance for the Irish province.

The 30-year-old secondrow produced a series of outstanding displays for Ireland during the November Test series and transferred that excellence into the blue jersey. Leinster won 19 of 21 lineouts with Toner claiming 12. 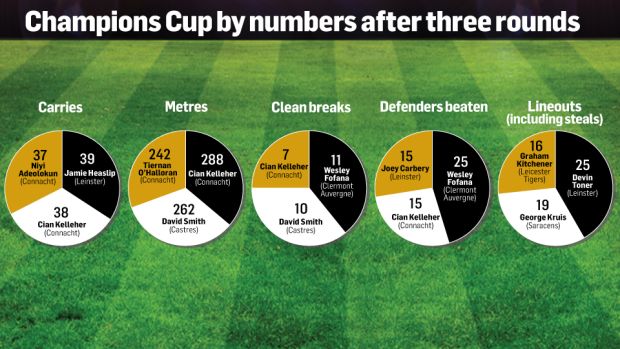 Upon the retirement of Paul O’Connell, the Lansdowne man has morphed into Ireland’s senior lineout figure, a role he’d previously discharged for Leinster.

That analogy is a little bit simplistic and doesn’t take into consideration a change in personnel in the various units within the pack that can compromise the successful functioning of a lineout but in a broader context does highlight his importance to the team, both as a primary winner of possession and the man who makes the calls.

He leads the tournament in lineouts won (25, including steals), six ahead of George Kruis, albeit that the England international has played a game less and nine ahead of the Leicester Tigers’ lock George Kitchener and Hugh Chalmers (Bordeaux-Begles).

The importance of the set-piece as an attacking platform cannot be overstated, more so against the better teams in Europe, or at least those who are currently in form. By way of example Connacht lost four lineouts in the first half of their defeat to Wasps, on a couple of occasions turning down shots at goal to go to the corner instead at a time when they were dominating possession and position.

Of all the Irish provinces Ulster’s lineout is by far the most impressive; in 240-minutes against Bordeaux-Begles, Exeter Chiefs and Clermont Auvergne Les Kiss’ side has won a staggering 33 from 33 lineouts, a 100 per cent strike-rate that doesn’t include several steals to boot.

When parsed against the injuries that have deprived Ulster of frontline secondrows like Franco van der Merwe (6 wins) and Alan O’Connor (4), for one of those games it really is a feather in the cap for forwards’ coach Allen Clarke (a former hooker) in terms of the set-up, options and timing and during the match the lifters and hooker Rory Best; Rob Herring has thrown a few too.

Iain Henderson (12) leads the way as the most lucrative source out of touch. Munster’s return of 17 lineouts won and four lost, across two matches is reasonably good too with captain Peter O’Mahony leading by example by claiming eight. It’ll be interesting to see what shape the lineout will have for the four provinces in this weekend’s reverse fixtures.