Meanwhile, Edinburgh centre Phil Burleigh has received one week after his red card 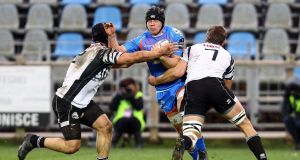 An independent disciplinary committee heard evidence and submissions from Davies, who admitted the offence, at a hearing in London on Wednesday.

The Scarlets had released a statement on Tuesday, saying that Davies apologised for his “unsportsmanlike behaviour”. Davies said he apologised to match referee Greg Garner during and after the game at Stade Felix-Mayol.

The Scarlets, meanwhile, are conducting an internal investigagtion under their disciplinary procedure.

“In upholding the citing complaint, the committee found that the offence was at the low end of World Rugby’s sanctions, and selected four weeks as the appropriate entry point.

Davies can play again on January 2nd, ruling him out of next Sunday’s Toulon return fixture and Guinness Pro 12 games against the Ospreys and Cardiff Blues.

Edinburgh centre Phil Burleigh, meanwhile, has received a one-week ban after being sent off during a European Challenge Cup tie against Stade Francais.

Burleigh was dismissed for striking Stade lock Pascal Pape, and an independent disciplinary commiteee, meeting in London, decided the offence was at the low end of World Rugby’s sanctions.

Burleigh can play again from next Monday, meaning he will miss the Stade return clash in Paris on Thursday.