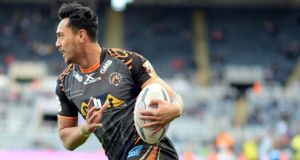 Denny Solomona was offered to Sale and two other rugby union clubs, according to director of rugby Steve Diamond, who says his Premiership club have done nothing wrong in the signing of the record-breaking Super League winger.

The Sharks confirmed the cross-code capture Tuesday morning after weeks of speculation amid a likely legal battle after the 23-year-old Auckland-born player failed to turn up for the start of pre-season training with Castleford.

The Tigers say they rejected three offers during the season for the former London Broncos winger, who had two years left on his contract, and are set to take the matter to the High Court.

Diamond, speaking at a press conference at Sale’s training ground at Carrington, dismissed talk of under-hand dealings and says he is confident an agreement will be thrashed out between the clubs.

“We’ve never wanted to go down the route of getting into any legal battles,” Diamond said. “We just wanted the deal done and I’m sure the powers that be are getting on with that as we speak.

“I don’t think we’ve done anything wrong at all to be perfectly honest. Players have agents and agents put players up on the market place. There were two other rugby union clubs that I know of who were in the market to sign Denny Solomona.

“We’ve just got to bite our lip and get on with it and be candid. We’ve got nothing to hide.”

Diamond says Solomona, who shot to prominence after scoring 42 tries for Castleford in 2016 but on Tuesday signed a three-year deal with Sale, will make his debut for the Sharks in Sunday’s Champions Cup match against holders Saracens at the AJ Bell Stadium after training with them for just over a week.

The player, who is seen by Diamond as an outside centre or winger in the 15-man code, has also been registered to play in the Premiership and has received the necessary clearance from the rugby union authorities.

The Sale boss says the player became available in the late summer after announcing his intention to play rugby union and apparently resigning from rugby league.

“I do understand Castleford’s perspective,” Diamond said. “He’s one of their star players.

“Denny’s attention was brought to me not by an agent but by fellow players, fellow Samoan lads who play here that he is friendly with.

“His desire was to get playing rugby union. He said he wanted to play the game he grew up with. If it wasn’t a club in England, he was going to go back to Auckland in the super franchises where he came from.

“In all honesty, the situation has been blown out of proportion. These things happen in sport every week where players move around. It’s behaving professional and getting it done.

“I think we’re at the point now where we’re at a bit of an impasse and I’m sure before too long that will be ironed out.

“There are two sides to all stories. I can say from day one that Sale have acted in the best interests of Sale and have done everything legitimately by the book. I think that will come out in the wash.”

Diamond says he does not believe the Solomona case will set a precedent and insists he would not stand in the way of any player wishing to leave Sale. That includes former Wigan and England rugby league winger Josh Charnley, who switched codes at the end of the 2016 Super League season.

“If I have a player here who says to me I want to play for another club, then I’d let him go,” Diamond added.

“There are very few that make the transition from one to the other. Denny has played rugby union up to being 19 so he’s got the fundamentals.

“I threw Josh in and he’s pretty much our most consistent player at the minute. Denny needs some game time to get that. There’s no point trying to play him in A team games and you can only do so much at training so exposure is what he needs.”

Castleford have appointed leading London barrister Nick Randall QC — whose other clients include England captain Wayne Rooney — and Leeds-based sports lawyer Richard Cramer to fight their case and have the backing of the Rugby Football League, whose chief executive Nigel Wood has expressed his concern to both the RFU and Premier Rugby.