Ross Byrne to take up full-time outhalf duties for Leinster 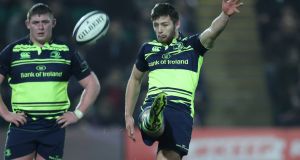 Leinster will place their trust in Ross Byrne for the foreseeable future in discharging the outhalf duties on foot of the news that Joey Carbery’s ankle ligament damage sustained against the Northampton Saints in a Champions Cup match at Franklin’s Gardens last Friday may require surgical intervention.

Carbery saw a specialist on Monday afternoon to determine whether surgery is required to sort out his damaged joint.

Leinster might be able to avail of a medical group discount as Rob and Dave Kearney were also slated to see a specialist for ankle issues.

Dave Kearney’s issue dates back a couple of months and refuses to clear up.  Rob damaged his ankle and was forced off during the game against the Saints. As things stand, Carbery, Jonathan Sexton and Rob Kearney will all miss the Saturday’s second clash with Northampton, this time at the Aviva stadium.

The Leinster management haven’t officially ruled out any of the players but that’s more protocol than positivity. Sexton hasn’t been on the pitch, training or playing with Leinster in six weeks, and is due to attend the Sports Surgery Clinic in Santry again this week.

A silver lining was the confirmation that Seán O’Brien hadn’t suffered a concussion following the stiff-arm assault by Dylan Hartley for which the Saints and England hooker received a straight red card.

O’Brien passed a Head Injury Assessment (HIA) but didn’t return to the pitch after complaining of a sore neck. The Tullow flanker is expected to be available for Saturday’s game.

The most taxing problem for Leinster coach Leo Cullen remains the backline. Zane Kirchner is an obvious replacement for Rob Kearney if the latter fails to recover from his ankle issue while Byrne, who replaced Carbery in Franklin’s Gardens, will start at the weekend.

The former Ireland under-20 captain who had stitches inserted in a laceration above his eye – so did try scorer Rory O’Loughlin – grew into the game and demonstrated his obvious ability in several touches, not least the crosskick for O’Loughlin’s try.

In the absence of Sexton, Carbery and Cathal Marsh, Byrne will get his opportunity to present his credentials. Leinster assistant coach John Fogarty is in no doubt about the capacity of the 21-year-old UCD outhalf to play a pivotal role against the Saints.

“He’s (Byrne) a great temperament without being in any way arrogant,” says Fogarty. “He has developed very well. He has a good understanding of the game, a smart player. It’s all about giving him these opportunities like he got at the weekend to gain experience.

“We believe he can develop into an international player. That’s what his ambition is and we see the same thing. I wouldn’t say he is a cocky or an arrogant player, he is sure of himself as an outhalf and they all need to be.”

Given the injury profile of those who wear the number 10 jersey in Leinster recently, Cullen will have contingency plans arising from further injuries.

Captain, Isa Nacewa would switch to outhalf in the event of an injury, while Noel Reid, if he recovers from a foot injury to make the match-day squad, played most of his formative rugby in that role. Tom Daly has played there for Lansdowne.

Robbie Henshaw and Michael Bent were given a clean bill of health following the rigours of the game at Franklin’s Gardens.

Northampton Saints will find out on Wednesday the length of the suspension that Hartley will undoubtedly face but will be able to call upon prop Kieran Brookes and flanker Calum Clark both of whom missed last Friday’s defeat.