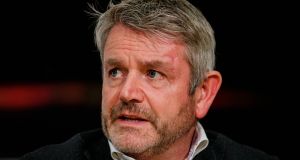 Cabinteely FC chairman Larry Bass: ‘We have heard so much about reform at the FAI, but this is what you would expect of a banana republic.’ Photograph: Ryan Byrne/Inpho

Clubs from the SSE Airtricity League’s First Division are to consider legal action against both the league and FAI after Shamrock Rovers were given the go-ahead to enter a B team in the competition for the coming season.

Drogheda United chairman Conor Hoey said that the clubs “need to reconvene to consider their response” to Tuesday’s decision by the National League Executive Committee (NLEC) to give the proposal the go-ahead. He insisted that “all options” including legal action are on the table, but his Cabinteely counterpart, Larry Bass, went further, saying that his club will not field teams against Rovers if the decision is not overturned.

Bass said that the seven First Division clubs represented at last week’s meeting with Minister for Sport Shane Ross all supported the idea of a boycott, but he and Hoey both acknowledged that a more formal discussion is now required.

The FAI’s board needs to endorse the decision, something that was clarified at the end of the NLEC meeting, which was told there was already correspondence from one First Division club – Athlone Town – questioning the committee’s right to make the decision. There is a contention, in fact, that the decision needs to be considered by the Football Management Committee before going to the board, but that committee, established as part of the recent governance reforms, has not actually been formed yet.

A fixture list for next season, already overdue, could be issued in the meantime, but other clubs believe that even if it is, it may prove to be something of an irrelevance given what they insist is unanimous opposition to the move.

“I would like somebody to explain what the benefit of this is supposed to be to Drogheda United or any of the other clubs,” said Hoey. “I’ve asked but nobody could tell me. I have a huge amount of respect for the people at Rovers and I can completely understand why they want to do this, but this is a fix for Shamrock Rovers, nobody else, and you have to ask whether Dundalk or St Patrick’s Athletic of Bohemians will be allowed to do it too if they decide they have to follow suit.

“Are they trying to kill the smaller clubs? That’s what it feels like. It feels like they are trying to make life more comfortable for the richer ones.”

It feels as though the entire thing is being downgraded, turned into a development league

Bass, who said he would consider his position on the FAI’s finance committee in light of the move, echoed those sentiments and asked whether an entire section of the game was going to be run “for the benefit of one club”.

“This has been done,” he said, “without any consultation. We have heard so much about reform at the FAI, but this is what you would expect of a banana republic. I have been very supportive of the idea of creating a culture of change at the association, but this would suggest that it is still being run on the basis of a nod and a wink.”

Cabinteely came into the league in 2015 after Shamrock Rovers had abandoned its previous attempt at using a B team in the first division to develop young players, but the club’s academy is far better resourced now and they see the move as having considerable benefits.

Longford chairman Jim Hanley said that the experience of that 2014 season does not help as other clubs “know how little support they bring and so every budget will be affected”; but, he insisted, “the bigger issue is the integrity of this league. It feels as though the entire thing is being downgraded, turned into a development league, just to suit their needs.”

All insisted that they would prefer to proceed on the basis of a nine-team division despite the challenges involved.