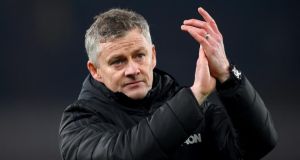 Ole Gunnar Solskjaer: ‘I’ve admired Pep’s team; they have raised the bar so much since Pep came.’ Photograph: Clive Mason/Getty

Pep Guardiola has said he would rather live in the Maldives or play golf than manage Manchester United even if it were the only job on offer.

Asked whether he would ever take charge of City’s fierce rivals, Guardiola said: “After training City I will never train them; I would not train [Real] Madrid [after Barcelona]. I’d be in the Maldives if I don’t have any offers. Maybe not the Maldives because it doesn’t have any golf courses.”

City lost December’s league meeting with United 2-1 at home, yet Ole Gunnar Solskjær has called for appropriate protection for his team before tonight’s match, the manager highlighting how the reduced foul count of Guardiola’s side was a factor in the win. “We got past their press last time and, if you count the numbers of fouls, I don’t think there were too many,” said Solskjær, before speaking in general terms. “That’s a big thing and sometimes I look at the referees and I look at our games and, even if they are just little fouls, there have been teams who have stopped us with these little fouls – which has stopped us showing how good we are when we attack.”

Fernandinho appeared to foul Daniel James near halfway to stop the play in the first half yet the Brazilian did not concede even a free-kick. Solskjær was reminded of this. “There have been a few fouls on Dan James and I am better off not talking about it,” he said. “But the referees have got to look at players with his pace. Even if they just knock the ball past them and they are stopped in their tracks of course it is a yellow card.”

Guardiola denied his team commit tactical fouls as a strategy. “I never said in one meeting about tactical fouls; sometimes it happens because they are so fast,” he said. “When you lose the ball, sometimes you are late and make a foul.”

Guardiola was reminded that his former assistant Mikel Arteta was shown on a documentary instructing David Silva, Ilkay Gündogan and Kevin De Bruyne to foul in the “transition”.

“You have to go to London and ask him,” said Guardiola of Arteta, the Arsenal manager. “We [often] have 62 per cent of the ball. You cannot make fouls when you have the ball . . . Sometimes you make a foul and it’s a yellow card and if he thinks that we deserve it.”

Before tonight’s game Ole Gunnar Solskjær offered an intriguing take on Manchester United’s status. “We are still, in our own heads, one of the biggest clubs in the world but we know that’s going to take time,” the manager said.

If this poses the question of how soon, more than a year into Solskjær’s tenure, the short-term mission is clearer: to reach the end of this season still in the job.

Do so and the Solskjær rebuild that began promisingly with last summer’s recruitment of Harry Maguire, Aaron Wan-Bissaka and Daniel James can continue into a second summer window. End it with at least three more major signings and the Norwegian will have recruited more than half a team since taking over and the side will truly be his.

The club’s stance regarding Solskjær continues to be one of patience and claiming a Carabao Cup win in a first full campaign would make his position for next season close to a cast-iron certainty.

Yet, in City, United have an opponent Solskjær rates as the benchmark despite December’s 2-1 league victory over Pep Guardiola’s side.

“I must say he has had a big influence [here] and since he took over Barcelona [in 2008] I have admired Pep’s teams,” he said. “But I’ve got to say I worked under the most influential one [Alex Ferguson]. You do see one of the best managers ever [in Guardiola] and you can see where he has taken his wisdom from. I had the pleasure of speaking and meeting Johan Cruyff back in the day when Jordi [his son] was here and you can see certain similarities.

“I’ve admired Pep’s team; they have raised the bar so much since Pep came. The standards he has set and his team have set is something for us to aim for.”

Despite this last sentiment being the same as that expressed by David Moyes when United manager, Solskjær is unlikely to face the same opprobrium as the Scot.

The reason is twofold. The first is Solskjær’s hero status at United from his playing days; the second that Moyes was speaking as manager of the defending league champions and five years later United’s decline is accepted – which is why Solskjær is being afforded more time than he might be.

The 46-year-old also has none of the in-built defeatism that plagued Moyes. His natural manner is upbeat. “That’s what we have to go for at this club,” Solskjær said of having to re-establish United. “What we have to aim for. That’s what we are here for - to take on the challenges given to us. We have been down [before] and we’ve always come back.”

Guardiola agrees that it will not be long before Solskjær’s team are genuine contenders for the big prize again. “I have incredible respect for this club – sooner or later they’ll be back and fighting for the Premier League,” he said. “In this period they struggle – [but] there is a not a team that wins and wins.”

United’s inconsistency is consistent, their latest league outing was a 2-0 defeat at Arsenal following two wins. Guardiola, though, believes encouragement for the Solskjær project could even be found in the defeat at the Emirates Stadium.

“He starts to see [from] his team what he wanted,” Guardiola said. “That is my feeling when I see his teams. Even the last game against Arsenal: they lost but we see clear what he wants. It was not easy to handle a team, take over a big club always demanding to be champions in all competitions but every manager needs time and I have the feeling that United are starting to play the way he wants.”

Guardiola identified Solskjær’s United being most dangerous when the speed of James, Marcus Rashford and Anthony Martial is harnessed expertly, as it was when City lost to them last month. “How fast they are,” Guardiola said. “How they run on the counterattack. How solid, how aggressive. We concede [only] a few counterattacks and in just two or three seconds they are in the box.”

Guardiola also had kind words for Solskjær, who was forced last week to defend himself from Robin van Persie’s claim he should not have smiled following the Arsenal defeat. “Every manager is in front of the press conference, in front of the players, the way they are,” he said. “Ole is who he is. If he wants to smile, it’s perfect; if he wants to conduct the team in that way, why should he change?

“Some are more expressive, others are calm, others shout more on the touchline, others sit. Who is the better? The guy who wins the last weekend – that is the best manager. If you react in that way it’s perfect, that’s the way he is. That’s all.” – Guardian