Spanish Supercopa in Saudi Arabia: why are so few fans going?

‘Excitement is through the roof in Jeddah’ - in Spain, it is a different matter 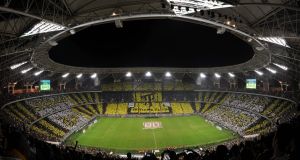 The fourth of an eight-point checklist informed them they would not be allowed to take ham or any pork product, “even if it is vacuum packed”. A couple of days later one Barcelona fan told the radio show El Larguero that he would be doing so anyway but not many will defy the rules – if only because not many will travel at all.

Atlético Madrid have sold 50 tickets, according to one fans’ group. El Mundo calculated that Valencia have sold 27, Barcelona around 300 and Madrid almost 700, although most of those are to people who happened to be near the King Abdullah Sports City stadium in Jeddah, Saudi Arabia, where the competition is being held. When it comes to supporters travelling specifically for the games, it said there were fewer than 200, paying upwards of £2,000, and – according to AS – as few as 40 Madrid fans making the journey for the semi-final. Of the tickets the clubs had available they have sold less than 10 per cent, although most have not been sold at all. They have been given away.

Barcelona v Atlético is sold out, with the Spanish football federation (RFEF) proudly announcing a day before kick-off that there are “only” 10,000 tickets left for Valencia v Madrid. “Excitement is through the roof in Jeddah,” the RFEF communiqué claimed. In Spain, it is a different matter.

It is not hard to guess what it was that attracted the RFEF to the fabulously wealthy absolute monarchy of Saudi Arabia, signing a three-year deal worth €40m (£34m) a year, half of which goes to the participating clubs, and that decision has met criticism from many sides, focusing on everything from format to human rights.

For a start Luis Rubiales is the RFEF president who blocked La Liga’s attempts to take a game per season to the US, only to take three games to Saudi Arabia, just as he took last season’s one-off Super Cup to Morocco. He insists the Super Cup is different – which in terms of competition integrity, it is – and claims the competition, traditionally played between the cup and league winners over two legs in August, was dying. The new final-four format, moved to January and opened up to include the next two highest finishers in the league, has largely if not unanimously been welcomed. But little else convinces.

Valencia insisted that as cup winners they should automatically play the final and threatened legal action over the fact that they were due to receive €3m, compared with the €8m each promised to Madrid, Barcelona and Atlético. The money was adjusted to €6m for Barcelona and Madrid, €3m for Atlético and €2m for Valencia, with a further €1m for each of the finalists. Happily for the organisers the draw set up a potential clásico in the final.

The league, which is at loggerheads with the federation, questioned the choice of Saudi Arabia, which it accuses of being at the heart of systematic state-sponsored piracy of the TV signal for Spanish games. Saudi Arabia has denied this.

Other reservations are more profound. Few Spaniards are going to Saudi Arabia; until recently, even fewer seemed likely to watch it on television after the state broadcaster, TVE, refused to bid for the rights, arguing it did not want to contribute to the whitewashing of the regime. At the start of December it was announced that Movistar would show the games.

Amnesty International sent an open letter to the RFEF alerting it to human rights violations, “including discrimination against women, freedom of speech restrictions … extensive use of the death penalty and torture of prisoners”. In September the Spanish education minister, Isabel Celaá, questioned the suitability of Saudi Arabia, citing gender equality concerns, a position supported by the minister for sport. An El País editorial described taking the Super Cup to Saudi Arabia as making sport an “instrument of tyranny and obscurantism”, the female footballer Vero Boquete calling it a “stab in the back”.

In El Mundo Orfeo Suárez wrote: “If the woman is Spanish and a footballer, we run to her defence. If she’s Arabic and anonymous, we look at our current account.”

Uefa’s president, Aleksander Ceferin, had advised its 55 members not to play games in places where women’s access to stadiums is restricted and “basic rights” are not respected but the federation insisted this was different: that rather than block football being played there, they would use this competition to open doors. Rubiales claimed the money made would be handed to the women’s game and even called this “the Super Cup of equality”.

He insisted: “We had a chance to help. We’re going to be a tool of social change that benefits men and women.” Women will be allowed into the stadiums and, unlike in the Italian Super Cup also played there, in all areas of the ground, not segregated by sex.

“We’re different to 10 years ago,” the Saudi minister of sports, Prince Abdulaziz bin Turki, told reporters from the RFEF’s Las Rozas HQ. “I don’t talk about politics; I talk only about sport,” he said, as if they were not intertwined, as this competition has shown. “I hope Spanish women buy tickets and enjoy the Supercopa.”

But hardly any Spaniards are buying tickets at all, let alone likely to enjoy it.