O’Mahony puts Cardiff behind him as Edinburgh beckons 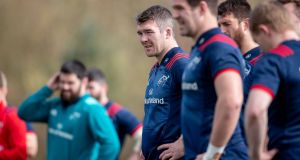 At first glance, this doesn’t seem ideal, not least as the Heineken Champions Cup quarter-finals now arrive just a fortnight after the Six Nations finale. What’s more, for the first time in six years the Irish players are returning to their provinces after an anti-climactic defeat.

In the last two seasons, for example, Munster regrouped after concluding Six Nations wins over England, and duly won home quarter-finals against Toulouse and Toulon, albeit they were indebted to some late and divine intervention against the latter by Andrew Conway 12 months ago.

Still, the last time Munster were in this position, three weeks after Ireland’s 22-15 defeat by Italy in Rome in 2013, they regrouped to beat Harlequins 18-12 in their Heineken Cup quarter-final at the Stoop.

It is what it is, as Peter O’Mahony more or less puts it, in the lead-up to Saturday’s quarter-final against Edinburgh at Murrayfield.

Now 29, O’Mahony has long since learned how to compartmentalise games and tournaments, be they good or, in the case of Cardiff two weeks ago, bad.

“I’ve certainly learned to do it better but I think there was a strange reaction to some of the stuff that’s been going on for the last few weeks, to be honest, but that’s part of it. I mean, we’ve won 22 of the 25 games or something,” he said, a hint of exasperation or even anger in his voice at the criticism Ireland’s Six Nations campaign drew.

“I just felt there was a bit of a strange reaction to it but look, this is part of the game we’re in and I’ve certainly learned better over the last few years to say ‘right, that’s done now’. Because, as I said, it’s too big a week for me to be hanging around.

“I had a nice few days off, spent some time with the family and back in here to a great buzz,” he said, in reference to his mini-break in Paris. “There’s a great buzz around here now, back into the lads. You can tell straight away when there’s Europe coming up. You come in the door of the place and there’s a great buzz always. It’s good to be back.”

Indeed, the prospect of another European quarter-final might even be the pick-me-up required.

“You’re back into the biggest game of the year for the club. So it’s not something that we’re new to or will be an issue during the week. It’s just something that has to be done.”

“I don’t find it particularly hard,” said O’Mahony of readjusting from one competition to another. “It’s too big a week not just to slot back in or hang around and kind of act differently or be quiet because it’s knockout in Europe. These are the games you want to be involved in and hopefully, whoever gets picked, it’s just a massive, massive week for the club.”

“I’d be doing myself an injustice if I didn’t come back in and just be myself along with all the other guys who have been away the last few weeks. We’ve just got to get back in and carry on as if we’ve been here all the time.”

Munster have the best record of any team at this stage of the competition, winning 13 of their previous 17 quarter-finals, including nine of 10 at home and four of seven away. Edinburgh are only in their third, but are a different force under Richard Cockerill – pretty horrible to play against and adept at suffocating the opposition, à la Munster.

“They have a great structure now under Richard Cockerill,” admits a respectful O’Mahony. “The game plan and the structure that he has provided, they have really taken to and have really stamped their authority on it. They are a difficult side to play against – very, very good defence and they play some excellent rugby when they get into your half.”

“They have a big kicking game as well, which is pivotal to what they do. Then you have guys like Bill Mata, Hamish Watson is back now, John Barclay made his comeback last week. They have a very good set-piece. Their line-out stats are some of the best in the competition.”

The Munster captain recalled the sides’ Pro14 quarter-final in Thomond Park last year, when Munster edged past the Scottish side 20-16.

Edinburgh have a very impressive set-piece both sides of the ball, scrum and line-out

“There was a point in it up to a few minutes to go. They put us under huge pressure, and they have probably been the in-form team this season, with regards to some of the performances. They have one loss this year at home, to Cardiff, and it was only by a couple of points. They have made it very difficult to go and get a win over there.

“They have a very impressive set-piece both sides of the ball, scrum and line-out. We probably say it about every game, but it is going to be particularly important this weekend – the battle of the line-out and the scrum. They are very impressive in both areas.”

The need to accommodate TV scheduling in different countries has contrived to make this a 12.45 kick-off, but again this is not something that bothers the Munster captain.

“It is a little bit more challenging than whatever, a 3pm or 4pm kick-off. But it’s kind of like a training day, really. We start in here early, obviously, and we just kind of emulate that all week. It’s not a big deal really. The S&C guys and nutritionists will have that side of it figured out, but we have been in more of these kick-offs than most people in this competition for whatever reason. We are half-used to it.”

In other words, once again, it is what it is.