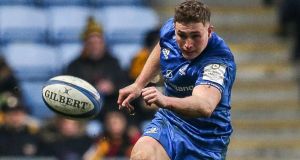 For a player who because of inexperience could appear vulnerable or open to self-doubt, Jordan Larmour says he’s breezing nicely into the heaving breath of Leinster love again. Joe Schmidt has always been “a treat ’em mean, keep ’em keen” type of guy. But Leinster, for all its competitive tensions, provides a more familiar setting.

Not for Larmour concern or lingering animus from the sloppy Irish finish in Cardiff. A dart and a side-step and the hint of a splash of water, his last act was a sneering rebuke to the open Principality roof. An unbelievably important try at the end of a rout and Larmour was on the end of it.

His bring-it-on-type attitude this week may spring from that. A shard at the end of a rummage through Six Nations muck and Ireland were spared a big bagel beside Wales’s 25 points. In time, Ireland may be able to talk more freely about how that score may have saved the team from more serious self-recrimination.

That may take some distance. But a savvy team psychologist could sell it as the first step of the great Irish comeback, a realisation that just as Schmidt values attention to detail and discipline, so too should instinct be encouraged.

“Whenever you lose a game you are disappointed. But like I said, it’s a good environment to be in and that’s where you want to be,” says Larmour of the Ireland team barracks in Carton House. “Sometimes you win and sometimes you lose and that’s life I suppose.”

In many team games players are encouraged to be creative in certain areas of the pitch, while in other more dangerous positions it is forbidden. The idea is to load fear-factor ability into those areas and permit players like Larmour to sometimes fail. Against Wales with light feet and a cut back, he succeeded.

“You know it’s going to happen in sport, winning and losing,” he says of the Wales match. “So I didn’t have to do a huge amount to cope with it. You just get back on the bike and go again. You can’t dwell on it. It’s gone. All you can do is to prepare the best you can for the coming games.”

It’s an admirable conversion to stoicism. For the hipsters that’s finding a path to contentment in accepting the moment as it presents itself. Maybe we can all learn from the 21-year-old’s determination to suffer a little in silence as he adjusts to his first real chill from the cold blast of critical commentary.

For now the possibility of Jacob Stockdale is plenty to consider, the Ulster wing-man, in a ton of ways, the polar opposite to Larmour. Tall against stocky, long strides against staccato running, rangy and strong against sharp and balanced, a powerful body against quick feet. Stockdale thrives in space; Larmour creates his own. They have faced each other before.

“Yeah I suppose when he’s on the starting [Irish] team I’m on the bibs training against him,” says Larmour. “He’s world-class and some of the tries he scores are a bit of a joke. So you give him the ball in a bit of space. He will chip it over you, go around you or go through you.

“He’s a big man. He can score a try from anywhere, so we have to be ready for that. We are going to have to have all hands on deck when he gets the ball.”

With seven tries in eight games for Ulster this season, Stockdale’s enterprise shows no sign of tapering. The only times he hasn’t scored have been against Cardiff Blues and Leicester, but he then redeemed himself with two tries against Racing in January. Last season he scored a try for Ulster in each of his five opening games.

But Larmour can see Stockdale’s nine tries in 10 Six Nations starts and raise him a hat-trick against Italy. The 21-year-old is charging up behind the 22-year-old and this week they may be at war. Both are marked “potentially fatal, care required”, the point being whether knowing how Larmour plays is an effective antidote.

Wales left-wing Josh Adams and number eight Ross Moriarty did their analysis. Larmour instinctively stepped around one and out-accelerated the other. Without that brief cameo it would have been 25-0 and a more heavily damaged Irish team. Sometimes the last act of decline can be the first step of restoration. Larmour might hold that thought.

1 Georgia and Fiji in line to join Six Nations sides in eight-team tournament
2 Obafemi has final say as Southampton stall Man United’s run of wins
3 Andy Moran on moving on from a Mayo career that glowed golden to the end
4 All in the Game: Jack fact-cheques money story
5 Malachy Clerkin: Sleep well Jack, you made us all happy
Real news has value SUBSCRIBE