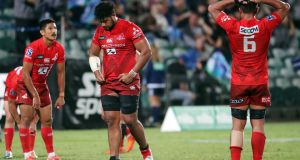 Japan’s Sunwolves will be axed from Super Rugby from 2021. Photograph: Getty Images

The Tokyo-based Sunwolves will be cut from Super Rugby after the 2020 season in a major blow for Japan as the nation prepares to showcase its development in the sport as hosts of the World Cup.

Super Rugby will revert to a purely southern hemisphere affair of 14 teams in a round-robin format, continuing the competition’s contraction since an ill-fated expansion to 18 sides in 2016.

The timing could not be worse for World Rugby, as the global governing body preaches a message of inclusion for emerging rugby nations ahead of the global showpiece starting in September.

While struggling in a tournament featuring mostly established South African, New Zealand and Australian sides, the Sunwolves have gradually improved and won their first away match in New Zealand earlier this month.

“The future of the Sunwolves will now be determined by the JRFU which has determined that Super Rugby no longer remains the best pathway for the development of players for the national team,” Sanzaar CEO Andy Marinos said.

Caretaker coach Tony Brown, guiding the side while regular boss Jamie Joseph focuses on the national team, was reluctant to address the decision ahead of their match against the Johannesburg-based Lions on Saturday.

“The game is tough enough as it is, you can’t look to two years’ time, you’ve got to look to this Saturday because we are playing a pretty good side,” he told a media conference in Singapore.

Rugby Australia (RA), one of the four southern hemisphere unions that control Sanzaar, said without the JRFU’s support, the Sunwolves would cost “tens of millions of dollars” to prop up.

Cutting them, however, would save millions, RA CEO Raelene Castle told reporters in Sydney.

She said Australia and New Zealand would continue to support Japanese rugby ahead of World Rugby’s mooted global ‘Nations Championship’ from 2021, which would add two lower tier nations to the southern hemisphere’s existing four-team Rugby Championship.

Marinos added that SANZAAR had proposed a “Super Rugby Asia-Pacific competition” which would include Japan, the Pacific Islands, North and South America and Hong Kong.

The pledges may be cold comfort for the players and the fans who flocked to Tokyo’s Prince Chichibu Memorial stadium to watch games.

“We are having the World Cup soon and we want to welcome rugby fans to Japan to see Japanese rugby. But maybe they do not want us. It is a bad message,” 42-year-old Tokyo resident Masashi Yamashita told Reuters.

The Sunwolves joined Super Rugby in 2016 amid a wave of optimism following Japan’s encouraging performance at the 2015 World Cup in England.

However, their entry came with conditions attached.

With South Africa’s teams complaining about travel demands, the Sunwolves agreed to play three “home” games every season in Singapore where they drew poor crowds.

They claimed only three wins from their first two seasons, but survived a cull of three teams at the end of 2017 after the expanded 18-team format proved universally unpopular.

But with a number of their local talents signed to company teams in the domestic Top League and often diverted to extended national team training camps, the side struggled for momentum, even with reinforcements from large numbers of expatriate players.

Castle said the Sunwolves would still need to turn up next season and be competitive.

“It’s always difficult when you make decisions like this,” she said.

“But they are under contract to deliver a Sunwolves team for next season.”