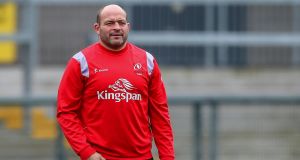 Rory Best smiles when at a twist in the usual narrative. The Ulster captain is asked about his opposing leader Johnny Sexton’s slightly more expressive tendencies come the heat of battle at the Aviva stadium on Saturday evening.

Spare a thought for Romain Poite. Best, the game-keeper usually charged with shielding referees from Sexton’s ire, has been flipped into a highly motivated poacher.

Flick through his past four years as Ireland captain and no high-stakes game has passed without Best imploring Poite or whoever to punish the opposition for illegally, or borderline legally, hurting the island’s most valuable rugby player.

“We’ll not be going out to target Johnny,” said Best, grasping the irony of repeating the words uttered by every opposing international captain since the damage-Sexton-beat-Ireland theory came into vogue.

“I’ll not be having to have that conversation with the ref about protecting Johnny because, ultimately, we’ll obviously put pressure on him but we’ll try to put pressure on all the Leinster team because if you go after one player in a team like that there will be 14 other players that are capable of picking you off.

“It will be an interesting conversation we’ll have when, I’m sure at some stage, [Poite] will have to bring us both together to talk during the game, so we’ll see who can keep their cool in the middle of that,” Best added with tongue buried into cheek.

If that conversation does occur, Ulster are staying in a contest despite every grain of logic – including a 15-point bookmaker spread for Leinster, which will increase significantly should Marty Moore (concussion), Darren Cave (ribs) and especially Iain Henderson (knee) fail to recover – indicating that the champions will progress to another European semi-final with plenty to spare.

“You are not going to keep Johnny quiet for 80 minutes but whenever he pulls something out we will need some magical defence that makes [people] go, ‘Wow, how did they do that.’ That’s what you must do against Johnny.’”

Like the way Hadleigh Parks tracked down Jacob Stockdale in Cardiff after Sexton’s clever kick pass.

Ulster have not won this fixture since March 30th, 2013 but Best’s career has proved the 36-year-old is no slave to history.

“At least we’re not playing at the RDS,” he responded. “They have been pretty good in those six years whereas we have been pretty crap at times. All we can do is concentrate on this game. Six years or 60 years, we don’t care, so long as it is a win.”

Best is asked to visualise the near-perfect scenario: 10 minutes remaining, Ulster lead by a score and must defend their very existence in the tournament; how will the majority of his teammates react to such an unfamiliar environment?

“You’re kind of guessing but if you look back at the season, there are four games where we have won two, drawn two in the last minute, which says we are not short on character, we are not short on guts and it’s just whether we can cope with that pressure valve. It’s about having the precision when it counts. There are a lot of kids in their first season here but you wouldn’t know they are the way they conduct themselves, the way they want to learn, and the way they have been playing for us.

“If we can get ourselves in that position, who knows? We are confident that we could see it over but, again, we are guessing.”

Leinster’s only loss in Europe this season occurred in Toulouse, but away to Bath at The Rec in December they struggled under atrocious conditions before a 17-10 win in the face of a double threat that saw Sam Underhill and Francois Louw outfox Dan Leavy and Josh van der Flier at the breakdown. Could Jordi Murphy and Marcell Coetzee create similar havoc?

“To say we have identified weaknesses would be a stretch but there are areas in their game that aren’t as good as their strengths. We are looking where we can attack them. We know we will get a handful of chances. To beat Leinster you got to take almost every one of them.