Montpellier back in the game with bonus-point win in Glasgow

Yellow cards prove costly for Scottish side in Pool 3 clash 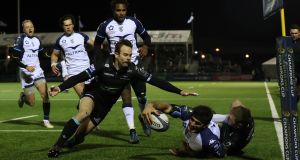 Glasgow had no one but themselves to blame as they succumbed to a third successive European Champions Cup defeat with a 29-22 loss at home to Montpellier.

The Warriors had looked in firm control at 17-5 in the first half, but two yellow cards saw the game swing dramatically in Montpellier’s favour at Scotstoun.

Referee Matt Carley was in the thick of it, sin-binning George Turner for an incident off the ball before Jonny Gray followed him in a 20-minute period that turned the game.

A brace from Kelian Galletier, a penalty try and one from Jacques du Plessis claimed a bonus point for Verne Cotter’s men, leaving Glasgow facing a likely exit from the competition after three defeats in three.

Vern Cotter’s side are now level with Exeter Chiefs on eight points, with Leinster leading the way in Pool 3 on 10 points.

Like with so many of their matches this season, the Warriors did not hesitate to show their intentions early on.

Finn Russell kicked an early penalty before his opposite number Aaron Cruden produced a piece of magic to split the defence ,spinning a long pass out to Galletier who just about touched down in the corner.

The hosts struck back immediately claiming their restart before forcing a penalty and kicking to the corner.

From a resulting maul, Ali Price fed a rampaging Leo Sarto who stepped inside and reached over from close range to touch down and open up a 10-5 lead after just 12 minutes.

The French side continued to threaten, with the Glasgow defence looking particularly weak, but it took a moment of brilliant from Russell – keen not to be outdone by All Black Cruden – to extend the lead.

The Racing-bound man flicked a superb pass out behind his back in the right corner, allowing Turner to barrel over.

With the game seemingly there for the taking, a familiar moment of inexperience brought Montpellier back into the game.

Turner was yellow carded for a cheap shot on Louis Picamoles, and after a period of pressure Galletier galloped in from the 22 for his second.

The momentum continued and Gray replaced Turner in the bin after bringing down a rolling maul as Carley signalled for a penalty try to give the visitors a surprise 19-17 lead at the break.

That lead was extended when Du Plessis just beat the defence to scramble over the line for a fourth try, but Sarto added his second after an end-to-end move that started inside the Warriors five-metre line.

Francois Steyn kicked a penalty to open a 29-22 lead and complete a frustrating night for the hosts.