Sam Warburton out of Six Nations after undergoing knee surgery 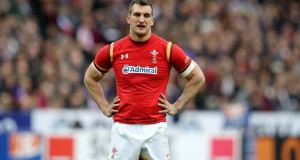 Sam Warburton could miss the rest of the season after undergoing a knee operation. Photograph: Ryan Byrne/Inpho

Wales star Sam Warburton will miss the entire Six Nations Championship and is unlikely to to play again this season after undergoing knee surgery.

Warburton, who has been recovering from a neck operation he had earlier this term, is expected to be sidelined for four to six months, the Welsh Rugby Union said.

He has not played since captaining the British and Irish Lions in the third Test against New Zealand at Auckland’s Eden Park five months ago.

In a statement, the WRU said: “Sam Warburton has undergone surgery to resolve a knee injury.

“With Warburton currently sidelined with a neck injury, the proactive approach was taken with a view of ensuring he returns to action fully fit.

“The recovery is anticipated between four-six months.”

And Warburton added: “In close consultation with the WRU and Cardiff Blues, we decided it would be proactive to have surgery now on a knee injury, and I am looking forward to returning to action fully fit.”

Flanker Warburton, 29, has played 74 times for Wales and led the Lions on their last two tours – Australia 2013 and then New Zealand.

The former Wales skipper was on course to recover from a neck operation around the Six Nations kick-off in early February, but he now faces a longer spell sidelined.

Warburton has undergone a handful of operations during his career, with a catalogue of previous injuries including a dislocated shoulder, torn hamstring, ankle ligament damage and fractured cheekbone, but he has always returned from such blows and maintained world-class form.

The hope now will be that Warburton can enjoy a full pre-season’s training ahead of the 2018-19 campaign before the World Cup in Japan in 2019.

Wales tour Argentina in June, but head coach Warren Gatland has already indicated that a number of his big names will be rested for that two-Test trip.

Aaron Shingler and Josh Navidi filled the flanker roles for Wales in their recent autumn Tests against Australia, New Zealand and South Africa, while Gatland should also have the likes of Justin Tipuric and Ross Moriarty in his Six Nations selection mix.

But Warburton has now followed his Lions and Wales colleague – Scarlets centre Jonathan Davies – in missing the competition. Davies was injured against Australia four weeks ago, and is unlikely to play again this season.