Chiefs and Leinster each go hunting for prized scalp 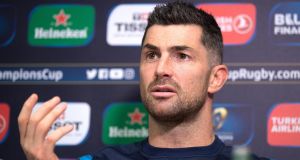 Rob Kearney: “If you have the taste of what success is, you get really greedy after you win trophies.” Photograph: Tommy Dickson/Inpho

The best game of the weekend, arguably, has been kept until last, with the high-flying champions of England hosting the Irish standard-bearers for much of the last decade.

Come tea-time there won’t be much tea being drunk, and a boisterous Sandy Park will be throbbing in anticipation of Leinster coming to the English south coast with their three stars on their crest.

Rob Baxter’s side, assuredly the best coached in England, fit all the criteria of a model club both intent on, and capable of, breaking new ground in Europe. Buoyed by the sweet smell of success, when earning their breakthrough Premiership crown last season, and having managed one quarter-final in four previous attempts, they have cut their teeth and are well-primed.

Uber efficient, they have averaged 34 points per game at Sandy Park this season, where they are unbeaten in exactly a year since Bordeaux/Begles won here.

While having much of Montpellier’s close-in ballast, they can vary the point of attack better, as one would expect with playmakers such as Gareth Steenson and Henry Slade, whose return is one of only two changes in a typically settled line-up. Lock Jonny Hill is the other, so their Lion, Jack Nowell, remains on the bench after his return from injury last week.

They are particularly patient in the opposition 22, pitching up tent and not packing up until they score, often off their mauls. While their clearing out would win the approval even of Joe Schmidt, what makes them so hard to stem is the depth and pace at which carriers come onto the ball. Significantly over half their 36 tries in the Premiership have been scored by forwards.

True to type, they have enjoyed the longest time in possession this season in this competition, holding onto the ball for an average of 21 minutes and 15 seconds per game, and that was against Glasgow at home and Montpellier away.

While it’s one thing analysing them, it’s another thing stopping them. Firstly, as Leo Cullen said yesterday, is the need to reduce their entries into the Leinster 22, which places discipline at a premium – not the easiest with Romain Poite in charge.

Another key ingredient will be maintaining line speed in defence, and somehow to prevent Exeter’s often remorseless accumulation of inches, with player latching on, around the fringes.

Leinster welcome back nine of their Irish contingent who were involved in the successful November window, as well as Isa Nacewa and Fergus McFadden to the wings in the absence of the injured Adam Byrne and James Lowe, who has not yet been registered. Scott Fardy starts and Jamison Gibson-Park is on the bench as their two permitted non-EU players.

Perhaps more pertinently, 11 of the side which handsomely accounted for Glasgow away in round two are back in Euro mode, and buttressed by the return of Rob Kearney, Garry Ringrose, Nacewa and Sean O’Brien, while the exciting Jordan Larmour has earned a place on the  bench. That’s pretty impressive and should also mean they bring their own capacity to retain possession, as well as their ability to score off turnovers, and Exeter were vulnerable to Saracens’ counterattacks a fortnight ago.

Looking ahead to these pivotal clashes with Exeter, Cullen added: “Every point is so important in these games. Sometimes, depending on what the situation is in the game, you have to make sure you’re battling it out for every point. They’re fascinating exchanges with a huge psychological component to them.”

Kearney is one of those from the golden generation which won this competition three times in five years and maintains that is more a source of inspiration than pressure.

“If you have the taste of what success is, you get really greedy after you win trophies. You want more and we understand, a few of us in the group, and coaches understand, exactly what it takes to win in Europe. So that’s a real benefit in the group, and then you’ve got the younger guys who are so hungry and keen to be a part of what’s on the crest and making their own contribution to getting another star on the jersey.”

It could even be that Leinster might lose this one, while not losing again in this competition. Indeed, a losing bonus point (or two) wouldn’t be the worst result in the world provided they emerge from the Aviva next Saturday afternoon with their heads above Exeter in the head-to-head.

But if they’re at their best, and often have been after Test windows, they’re also capable of acquiring a prized scalp.