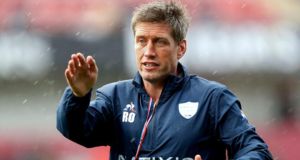 TV3’s landing of the Six Nations Championship represents their “single biggest investment in sport,” according to Group Managing Director Pat Kiely. Unofficially the figure for the rights is said to be around €10 million over three years.

In a new era of independent television coverage that has moved away from RTE, Joe Molloy is preferred to Matt Cooper to anchor the programme with former international players Rona O’Gara, Shane Horgan, Alan Quinlan, Shane Jennings and former Leinster and Scotland coach and Irish Times columnist Matt Williams continuing as analysts.

TV3’s Sinead Kissane will be the sideline reporter for the network beginning with Ireland’s opening game against France in Paris on February 3rd, while Dave McIntyre will be the principle commentator.

O’Gara will probably cover just the opening two matches in the championship because of his coaching commitments with New Zealand side Crusaders, who he joins from Racing in Paris at the beginning of January. His contract with TV3 is for four years.

“It’s a big opportunity and very exciting,” said O’Gara on his move to the southern hemisphere. “It’s a rugby club at the end of the day so it’s not that big a change. If you want to be a rugby coach you have got to be prepared to travel. I’m still relatively young, the kids are young so…”

Like most on the panel O’Gara sees England as the main threat to Irish chances of winning the event, although all of the panel see Joe Schmidt’s side as also having a strong credentials, especially if it comes to a show down in Twickenham in the final match on March 17th.

“England are already planning not only for the next World Cup but to win it,” said the former Irish outhalf.

“That’s the sort of language they are using. Like Ireland, they have key players who if they get injured they are struggling. For them Mario Itoje and Owen Farrell are like Jonny Sexton and Conor Murray for us. But Ireland and England are the two favourites for me.”

It is the first time in the history of the championship in its various forms that the national broadcaster will not have live coverage with TV3 Group Director of Broadcasting Niall Cogley promising change in how they handle the games but nothing radical.

“We are not looking to reinvent rugby coverage on tv,” said Cogley. “But we are hoping to bring some new fresh thinking.”

Ireland’s championship begins with an away match against France on February 3rd.