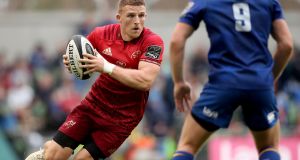 Munster’s Andrew Conway: “Good timing got me in again [to the Ireland team] in November. But that’s what rugby is. You have to take your opportunities when they come.” Photograph: Dan Sheridan/Inpho

Everything changed on March 18th. England in Dublin. Number 23 arrived into a hectic fray for cap number one. Eight long seasons after his Leinster debut as an 18-year-old, a night that had far too many heralding version 3.0 of Brian O’Driscoll, following the injury-jinxed Luke Fitzgerald model.

Only now are the wider public learning about Andrew Conway. Coherent, confident, steely gaze. Important aspects to the media, irrelevant to Munster supporters. They like what they see even if it took a while for him to get where he is now.

Joe Schmidt used him in six of the last seven internationals. The Ireland coach prefers his players saying as little as possible. Players fear Schmidt.

But Conway sat with the media in Japan last summer to flick through the long and winding road from teenage prodigy, capped by Michael Cheika and lasting Schmidt’s three seasons at Leinster before coach and player paths diverged.

It seemed like a succession of injuries and flaws in Conway’s game, like kicking, despite unmistakable natural talent which had him rated higher than Craig Gilroy and Simon Zebo at underage, would deny the current reunion.

“Yeah, we were good,” he said about the distant past.

Conway was the star. For a time it proved his curse.

Schmidt’s Ireland either discards or moulds a player until he’s whole. Journalists call them Joebots. Flair is expendable as we have seen with Zebo and Gilroy.

There are certain non-negotiables: If you offload it better stick. Don’t dare get tackled into touch. Ruck like a cordless drill. Leap like a salmon. The ability to levitate is highly recommended. Always do the right thing. Unable to compute information to a PhD student standard? So long, farewell.

Conway is new to the national squad. After being named man of the match from fullback against Fiji he was pressed about his new surroundings.

“I’d assume this is his [Schmidt’s] thought process: you have had so much pressure put on you mentally Monday, Tuesday, Thursday that you get a bit of freedom when you are out on the pitch, you let the shackles off a bit. As long as you know your detail. It’s tough but really good to play under.”

The 26 minutes and 10 seconds with Andrew Conway on the top deck of Munster’s centre of excellence in UL last Monday was never going to be enough time.

The entire Munster squad had arrived for a meeting before the last question was asked, about Zebo’s imminent departure, at almost a whisper.

It also denied the chance to explore Conway’s own contract negotiations. Munster CEO Garrett Fitzgerald is straining to get David Nucifora to loosen the purse strings so the province do not lose two international fullbacks.

“Zeebs has had an unbelievably good Munster and Irish career and obviously there is an unbelievably good offer on the table in France that he was keen to take. It probably cost him selection for the World Cup – who’s to say it will? – but he knows that’s a probability. I’m sure he weighed that up.

“He has a young family. His partner is from Spain and she’s not uprooting herself, she’s already done that, so they are just moving somewhere else. It’s a lifestyle thing, obviously there is a financial gain but there is an opportunity to grow as a person. I’d never think anything bad, like you’re leaving Munster or Ireland, it’s not as black and white as that.”

The interview is all but over. They call you Bomber, where did that come from?

Bomber doesn’t stick for no reason. Such a title is earned. See the last seconds of the 2007 Junior Cup final when he stepped and swerved for a spectacular try to match previous magic by Luke Fitzgerald and Gordon D’Arcy on the same Donnybrook grass.

The Munster connection existed long before Bomber Conway tracked Axel Foley’s men to the 2006 Heineken Cup final. His uncle, the former Shannon hooker Mark McDermott, made the same switch from Blackrock to Limerick before him.

In fact, Munster sought Conway’s signature straight from school, forcing Leinster to make him only their third 18-year-old, after Fitzgerald and D’Arcy, to get a full professional contract.

Besides an electric opening six minutes against the Scarlets on February 20th 2010, his four seasons in blue proved an injury-interrupted disappointment. Schmidt only started him 26 times in three years. He ran in eight tries. Three in one game. The hat-trick came against the Ospreys in May 2013 to ensure he started the Challenge Cup and Pro 12 finals at the RDS. Two trophies, two medals and away south he went.

Change was needed, and change occurred.

The conversation begins straight from The Secret, the laws of attraction, self talk. Say it aloud and it will be so. Conway scribbles in a notebook, his goals are pinned on the wall of his little home office.

“I don’t remember back that long ago to be honest.”

“Well, I came on against England because Keith Earls got injured and there was a few injuries in the run up to it. There had been two little niggles that stopped my Six Nations in its tracks before it got going. Two unfortunate injuries, groin and neck, in training. I was further along the line than it might have appeared but then I had to go to the back of the queue.

“Good timing got me in again in November. But that’s what rugby is. You have to take your opportunities when they come. There was an element of luck to it.”

For a very long time he had none.

“I wouldn’t be thinking too much why my career didn’t go the same way as Lukey Fitz or Brian O’Driscoll because I am different to them. I am not the same person so it is not going to be the same because we went to the same school.

“I understand the comparison because it is an easy thing to write about. That’s always going to happen. I’m sure it’s going to happen to the next fella, and the fella after that. I imagine they won’t have the same journey as me either.”

In Munster he ceased to be that Andrew Conway.

“I had to earn everything I got here. Probably the only thing I got handed to me when I was younger was playing for Leinster because I had that thing you were talking about where I was known as a good schools player so they want to give you a shot to see if this fella is the next this or that.

“When it doesn’t happen immediately they are not going to keep giving you opportunities.”

And there were many Schmidt players in his way. Kearneys. Fitzgerald. Isa Nacewa. He wasn’t one then. So Munster fit his attitude. Until he got injured, again.

“The first year was tough because I got a few injuries and it was such a different set-up to Leinster. We trained twice a week, travelled to Cork one day so we loaded up on the on-pitch time. I was used to three or four days training split over an hour on Monday, 70 minutes on Tuesday but here we would be going 90, 100 minutes on a Tuesday, Thursday and I picked up a few niggles through playing rugby.

“You are trying to hang on to prove to the lads you are a good enough player but your whole schedule is thrown out. You see it all the time with young fellas; they struggle with injury as their bodies adapt to new demands.”

“Looking now there are very few guys contracted the year they leave school like I was or Luke was. That’s right because you also need time to mentally settle into what professional rugby is.

“I looked, ‘Okay, that’s what Luke did in three years [making the Lions tour age 21]’ so you think hopefully it will go my way. When it doesn’t it leaves mental scars that you then have to get over the next couple of years. You need to find your own way. There is definitely a case to easing guys in.”

Temperament seems so important to stay in a Schmidt team.

“Yeah, it is. I’m just guessing, but I think there would be an emphasis on guys that are able to come in and adjust to the differences.”

This morning, before the Leicester game, he’ll read aloud the goals on the wall in his little office. Self talk.

“I could tell you what they are at the end of the season if the Australia tour is hit. Now they are not even game specific. I want to throw a pass in training that I haven’t thrown before or see the pass I wouldn’t have seen before.”

The interview is over before many questions are asked. A deeper analysis of his career can wait.