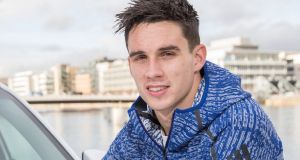 It is his first career arm break. A rib yes, ligaments and muscles too but never an arm. Just as Joey Carbery brightened up an evening in Aviva Stadium against Fiji, his Six Nations, or at least the beginning of it, appears to have fallen into shadow.

Carbery’s left arm is in a cast. Three bones are broken just above the wrist and the scaphoid, because of the blood supply, is the one that will focus medical attention as the healing process laboriously continues.

He had surgery the day after the match and three screws were inserted to hold the bones in place.

Right now he is frustrated and hopeful but even the kinder calculations will probably keep him out of the early Six Nations games, the first against France in Paris on February 3rd and then Italy at home the following week. There are then two weeks before Ireland face Wales in Dublin on February 24th.

No one more than Carbery craves some certainty but all of it, his entire comeback schedule, is still up in the air.

“I have to get out of the cast and see how it has healed,” says Carbery. “So it’s depending on how well it has healed. Hopefully it is not too far after the new year.

“Once I get out of the cast I am going to be in a splint. So it could be another eight weeks from the day I get the cast off or it could be three weeks. We just don’t know. I hope it’s quickly because it is pretty annoying at the moment.

“I’d love to get two or three games before the Six Nations, so I can really get back into the run of it.”

It is brutal timing given Carbery’s natural élan in the position and how he can change the landscape going forward from outhalf. But Ian Keatley, still a better kicker, has shown poise and put in enough mileage to back up Johnny Sexton.

It was a simple collision that caused the break. Carbery was carrying the ball in his right hand and tried to fend off a tackle from the outside centre.

The two players fell with the heavier Fijian, Jale Vatubua, 6ft 2in and over 19 stone landing on the Irish outhalf’s arm caught between the two bodies. The arm, says Carbery, “just went the other way”.

“Yeah, 13 lined me up in the first half as well,” he says. “That was a sore one. I’d say their tackler at 13 is definitely the hardest I’ve ever been hit.

“It was instant pain. But I thought it might have been just a bang. Then I looked down and it was a bit flimsy so I was like ‘there’s something wrong here’. I broke three bones.

“The scaphoid, which doesn’t get too much blood flow, that’s probably the main focus, the one they’re most worried about. That’s why I’ve got to wait and see. It’s only a small bone but it’s quite crucial to the way the wrist moves, so passing and stuff could be affected if it doesn’t heal properly. That’s why we’re kind of unsure.”

It is going to be a feature of Carbery’s rugby life to take the hard tackles at pivot, a different type of hard than at fullback. The Fijian hits came just as he was vulnerable and releasing the pass.

More athletic and elusive than robust or durable, he explained that as kids in New Zealand they played matches in bare feet and up to under-13s were graded according to weight not age. Over 50kg and younger than 13 and kids were put into a different weighted team.

Never skinny Carbery, who at outhalf or fullback, will also miss Leinster’s European block of games and the derby matches.

Fate would have it that way, for Carbery and as much too for Leinster outhalf Ross Byrne.