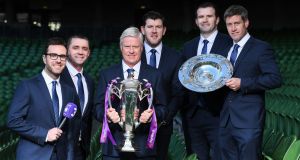 Ronan O’Gara in typical, considering mode is staring at his shoe laces, sliding down the chair. It is O’Gara cutting to the chase. The first Irish coach to go to New Zealand, he has become a credible sounding board for most things rugby, all things Ireland and Munster.

What it is about O’Gara, who will be an analyst for TV3 in the first two Six Nations matches, is the lack of fear to be counter culture.

“It’s important for the public to know too that the IRFU pay well,” he says wading in to the moment-defining Zeebo, O’Mahony, Stander debate. “I firmly believe that and I actually probably know that because I know what I’m talking about from the French and Irish markets.”

Poof, another accepted truism that the IRFU play hard ball with their elite players for modest salaries vaporises.

So the IRFU deals stand up reasonably well?

“Well if they weren’t I think everyone would be playing in France,” he quips. “That’s the reality. Figures have to add up for players. If they don’t add up, they will be gone.”

O’Gara is naturally a mover. Paris and now Crusaders, he was once a one-club player. His view is wages should not define what decisions players makes unless money is absolutely the absolute goal. If so, he says, a player should follow salary. Playing for one shirt in these changing times, he adds, remains a beautiful kind of privilege.

“Top players in this country, I hope they realise how great it is to be playing as a one-club man,” he says. “I think there is something extremely special about that. But I understand the environment and the finances and everything is changing.

“All the players from the team I played on and won European Cups had offers to go as well for far more money. Is that what creates a massive identity with teams and the supporters? There is something incredibly great about playing with your home team and achieving.

“Every player tests the market. They are all out there looking to get better deals. That happens and it has always happened.”

All of it puts the IRFU under huge pressure to develop attractive packages.

O’Gara has an empathy with the bind in which Irish rugby finds itself. But he’s a natural pragmatist, a realist and straight shooter. The market decides but occasionally a billionaire comes in and queers the pitch with inflated numbers, makes mincemeat of real values.

“That creates all kinds of confusing signs for players’ mental state because he hears this guy is getting that and then all of a sudden the market is completely unbalanced,” says O’Gara.

And what does it all mean for Munster, Leinster and Ireland? What should Joey Carbery decide when his contract is up, or Garry Ringrose?

“It’s going to come to a stage where there is going to be, in the next five years, guys playing for Ireland who aren’t playing for the provinces,” he declares.

But it’s not Carbery, or Ringrose or Murray or Sexton or Henderson that O’Gara has in mind.

“We won’t have a massive test this summer,” he says of big money offers. “But maybe we might with Tadhg Furlong. I think it took everyone by shock in France that Irish players will go because they [the French] didn’t think they would.”

1 Rugby players taking the opportunity to focus on the long game
2 Saudi Arabia-funded takeover of Newcastle United in serious doubt
3 Ward's brother fails to put him in the picture over movie deal
4 Decision expected next week on staging of College Football game in August
5 Coming fourth in the Olympics didn’t change this fearless quartet, time did
Real news has value SUBSCRIBE