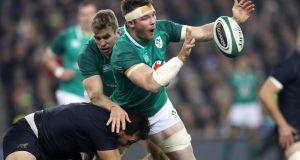 Ireland’s Peter O’Mahony offloads during the Test match against Argentina at the Aviva. Photograph: Billy Stickland/Inpho

An update on Peter O’Mahony’s stalled contract negotiations with the IRFU are expected today when the Munster captain joins new coach Johann van Graan before the media ahead of back-to-back Champions Cup matches with old rivals the Leicester Tigers.

O’Mahony, despite a punishing November on Ireland’s blindside flank, is set to return at Thomond Park this Saturday (7.45pm, BT Sport) alongside fellow internationals Conor Murray, Dave Kilcoyne, Andrew Conway and CJ Stander, another whose new contract is with high-performance director David Nucifora.

On the surface Munster’s season looks healthy but Simon Zebo is the latest key player to exacerbate the injury crisis van Graan has inherited.

Zebo, who leaves the province this summer to join a French club, widely reported to be Racing 92, recovered from knee damage to start Saturday’s 36-10 defeat of the Ospreys only to be withdrawn at half-time with damaged ribs.

“Zebs we took off as a precautionary measure,” said van Graan. “Last week he had the knee and here he took a hit to the ribs. We will know more on Monday but it doesn’t look serious. Might be a week or two but I wouldn’t want to speculate yet.”

Losing Zebo should be offset by Conway’s return to fullback, where he featured for Ireland against Fiji, but the Munster backline has been decimated by recent injuries. Chris Farrell (knee) and Keith Earls (hamstring) will not play anymore rugby in 2017 while the condition of first-choice outhalf Tyler Bleyendaal (neck) remains unclear.

Unlike Connacht centre Bundee Aki, Bleyendaal only qualifies for Ireland through residency next month because of a delayed arrival from New Zealand in 2014 as he was recovering from neck surgery.

It means JJ Hanrahan, who replaced Zebo at fullback against the Ospreys, comes into outhalf contention behind Ian Keatley.

The 22-year-old loosehead from Cork Constitution, who played five times for the Ireland under-20s in 2015, was primed for a breakthrough season.

Leicester, once again under the stewardship of former Leinster coach Matt O’Connor, continued a difficult domestic season by losing 32-25 to Wasps over the weekend, a result that leaves them sixth in the Premiership.

They are, however, above Munster in Pool 4 due to bonus points gained in the opening rounds.

Leinster are in better shape but Leo Cullen must integrate 14 internationals before travelling to English champions the Exeter Chiefs next Sunday evening [5.30pm on BT Sport].

Exeter, guided as competently as ever by discarded Ulster outhalf Gareth Steenson, overwhelmed Bath 42-29 just as Leinster’s new winger James Lowe sparkled on debut during the 36-10 victory in Treviso.

“We are very cautious at the moment,” said Cullen. “If you look across our Pool, Montpellier were top of the Top 14 going into this weekend, Exeter were top of the Premiership and Glasgow are 100 per cent, 10 from 10, in the Pro 14.

“Sandy Park is a very tough place to go. It’s become a real fortress in English rugby. They are the Premiership champions. A few huge weeks for us.”

Lowe, another late Kiwi arrival as he had commitments with the Tasman Makos, crossed for two tries in a busy first cap that also marked Garry Ringrose’s try scoring return after a six-month layoff following double shoulder surgery.

“James is a player we admired from afar,” said Cullen. “He has credentials as a proven finisher. He did a lot of good things during the game. We tried to manage him reasonably sensibly, because we are conscious he is coming off a very big season. Good to get him up and running.”

The shape of James Ryan (shoulder) and Robbie Henshaw (hamstring) will also be revealed today but, besides Jamie Heaslip and Joey Carbery, Cullen is close to a full deck.

Ulster hope to have their Irish contingent available – Rory Best featured off the bench in Friday’s draw with the Dragons, Iain Henderson and Jacob Stockdale were rested – for the early Sunday lunch time game against Harlequins at the Twickenham Stoop.

Connacht’s disastrous Pro 14 campaign under Kieran Keane continued with a 24-10 defeat away to Michael Bradley’s Zebre. Their focus switches to Challenge Cup action and a Saturday night fixture down in Brive.