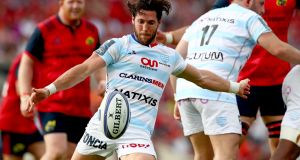 Racing 92 have suffered a major blow two weeks out from their European Champions Cup final against Leinster in Bilbao with the news that scrum-half and placekicker Maxime Machenaud suffered ruptured knee ligaments in his side’s 39-15 win Top 14 win away to Bordeaux Begles on Saturday.

The incumbent, 29-year-old French scrum-half is expected to be sidelined for six to nine months. It is a cruel blow for Machenaud, which also continues a hugely unfortunate run of ill-luck for the player.

In the 2016 European Champions Cup final loss against Saracens, Machenaud was forced off early on with concussion, thus compounding the absence of Dan Carter from that final as it denied Racing any kind of kicking game.

The ensuing French Championship final in Barcelona’s Camp Nou, attended by almost 100,000 supporters, was somewhat bittersweet for Machenaud, for although Racing won, this was after he had been brandished with a red card.

The likelihood is that Machenaud, who has been an ever present in their run to the final and has scored 85 points, will be replaced by the ex-Brive scrum-half Teddy Iribaren, while in a further blow for the Parisians, experienced hooker Dimitri Szarzewski has been sidelined for three to six months after undergoing an operation on the torn bicep he suffered in their semi-final win over Munster in Bordeaux a week previously.