Ulster Rugby to meet NUJ over ban on news reporters 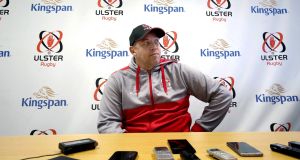 Ulster Rugby will meet with representatives of the National Union of Journalists (NUJ) on Tuesday following a recent ban on news reporters attending press conferences in the wake of the rape trial involving players Paddy Jackson and Stuart Olding. Both players were found not guilty.

The meeting comes after an open letter, signed by over 90 journalists, was sent to Ulster Rugby in protest over the ban and requesting an urgent meeting with the chief executive officer of Ulster Rugby, Shane Logan.

The journalists are members of Belfast & District and Derry & North West branches of the NUJ.

In the letter, the NUJ pointed to Ulster Rugby’s policy of dividing news and rugby journalists and trying to restrict legitimate media coverage.

It said the “attempt to stifle media coverage of the context and consequences of the recent trial is an unjustifiable interference with the freedom of the press, and with the rights of everyone to freedom of information and expression.

“The sports journalists among our membership fully understand the wider public interest in this matter. We reject and condemn the attempt by Ulster Rugby to divide us by restricting access to rugby correspondents, while denying other bona fide journalists the right to ask questions.”

The restrictions came following Ulster Rugby concerns after an Easter Monday press conference when most of the questions centred on the acquittal of Jackson and Olding. A subsequent statement from Ulster saying they had consulted with regular press conference attendees before implementing the ban was refuted by rugby writers.

An NUJ official said on Friday that Ulster Rugby’s response to the open letter was “warm and encouraging.”