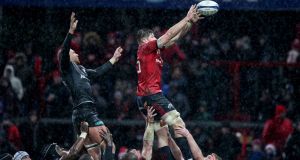 Kick-off: 3pm. Venue: Allianz Park. How to follow: The Irish Times liveblog will begin from 2.30pm. On TV: Live on BT Sport.

Munster have emerged from their two home clashes with the two sides who have beaten them in the last three seasons at the semi-final stage unbeaten, which is no mean feat. Alas, it still looks inadequate as things stand.

Munster could easily be sitting atop the group. No-one did more to salvage an unlikely draw for them against Racing than JJ Hanrahan, but had his attempted drop goal sealed the win they’d be sitting atop the pool now on 13 points, two points ahead of Racing instead of one behind them, and seven ahead of Saracens on six points.

Alternatively, had they been a little more clinical when playing with the best of the weather in the first half last week against Saracens, and so denied them a losing bonus point, they’d have a six-point buffer over Saracens instead of five.

Hence, it is a measure of this pool’s competitiveness that Munster’s return of six match points from those two games, while conceding two to Racing and one to Saracens, that it has left them with plenty more to do, starting with Saturday’s imposing visit to the damaged and disliked, but still reigning, champions.

What’s more, that losing bonus point in Thomond Park with a side missing many of their front-liners has kept Saracens interested. As he intimated he would, in again rotating his squad and making a dozen changes in personnel to his starting lineup, Mark McCall has sacrificed one World Cup starter in Maro Itoje, but recalled his others in Mako Vunipola, Jamie George, George Kruis, Billy Vunipola, Elliot Daly and captain Owen Farrell, as well as Scottish winger Sean Maitland and scrumhalf Richard Wigglesworth.

Fullback Max Malins and lock Joel Kpoku will both start a Champions Cup game for the first time.

Ala Itoje, Will Skelton and Brad Barritt are also rested, with centres Alex Lozowski, and flankers Nick Isiekwe and Ben Earl the trio retained. Significantly too, with Jackson Wray, Ben Spencer and Duncan Taylor amongst their replacements, their bench is nothing like as callow as was the case last week, when the average age was 21-and-a-half.

With Saracens’ lineout having been strengthened, on balance, by the return of George and Kruis (which sounds a little confusing) it came as no surprise that Munster opted to retain Billy Holland at lock and Peter O’Mahony at openside along with Tadhg Beirne in the backrow. This gives them as much experience and options as possible to cope with the heat that will assuredly come from the defensive Saracens line-out, and with the additional option of Jack O’Donoghue off the bench.

Johann van Graan has made one change to the starting lineup, with John Ryan recalled for his 150th game for Munster and Stephen Archer reverting to the bench. In retaining a 6-2 split on his bench, he has replaced the suspended Arno Botha with Tommy O’Donnell, while Dan Goggin has come in for Sam Arnold.

Munster are clearly dead set in their attacking ways, weather permitting, and will need to not only bring their ambition but also their execution to this fixture and this 4g pitch. Although they hold a 6-4 lead in the sides’ head-to-head record, and last week’s 10-3 win ended a run of three heavy defeats in succession by Saracens, it was the lowest scoring pool win by an Irish side in over a decade.

Strikingly too, it means that Munster have failed to score more than 18 points in any of their last eight clashes with Saracens. While there could be some light showers about in the second-half if the forecast holds true, it will be nothing like last week’s second period, when you wouldn’t have put the cat out.

The holders’ famed wolf pack defence was in familiar mood in what amounted to this side’s one outing to date, a sleeves-rolled-up win away to Bath two weeks ago when Farrell led the way with 15 tackles and kicked seven out of seven, while playing a key role in the rare spell of attacking rugby which produced a try by Maitland.

In truth, no team has come to represent what is seen as Munster’s semi-final glass ceiling in Europe more than Saracens, witness their 26-10 and 32-16 wins at that juncture in the Aviva Stadium and Ricoh Arena three seasons ago and last season.

By extension therefore, while there is no bigger test for their more developed passing and running game, no team has demanded that Munster go down this route than Saracens.

Then again, Saracens haven’t really found their mojo yet this season, and they retain only six of their starting lineup from last season’s semi-final. Munster will need to take their chances. They may well need to get something out of this game too, and they could be good enough to do so.