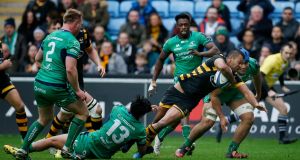 For every action there is an equal and opposite reaction; home games follow away games but in Kurtley Beale Connacht have such a strength facing them they could possibly convert him into a weakness; defensively.

Beale made many great reads in last weekend’s win - but especially on 54:43 from the pull back by Jack Carty to Matt Healy. It was a five on three overlap and I assume Beale counted the numbers in making his decision to hit man and ball.

This he did and did extremely well, but it happened with such regularity that if Connacht present a certain picture then there’s an opportunity to lull him; same picture but with a slight difference.

Healy can adjust his depth ever so slightly and create an extra second for the man and ball impact releasing the ball to make a four on two with Beale lost in contact. Call it ‘Healy’s murder ball’ but Beale’s enthusiasm creates opportunity outside and behind.

Of course Beale is a phenomenal athlete with an amazing footballing brain and is unlikely to fall for such a gimmick twice but he will have to adjust his defensive aggression which will afford more opportunities for Connacht to exploit.

The six day turnaround is never ideal but is especially troublesome for the less resourced team; the one with key injuries.

Connacht will have little time to adjust from Sunday but if they do there’s huge opportunity.

For some time Connacht have been extremely comfortable in possession. Leicester in Thomond for instance were sloppy, inaccurate and continually fed into the Munster strengths making the ball a liability. Contrast this to Connacht’s run to the title last year and Pat Lam’s side look like the most comfortable team in Europe around the ball.

But, Connacht against Wasps looked vulnerable ball in hand. Why? They had similar possession, favourable territory, an extra man for 10 minutes with Beale in the bin and blew Wasps off the charts by Connacht metres run - led by Tiernan O’Halloran (561 to 302) forcing Wasps into 22 missed tackles.

So why did a team traditionally so comfortable with the ball in hand lose? Lineouts are one differential and the stats (territory and possession) eventually swung in Wasps favour. Connacht missed 15 tackles, many in the closing quarter.

But O’Halloran alone provided 20 per cent of all Connacht’s carries and 47 per cent (263 metres) from the back three (including Matt Healy and Colin Blade) which is extraordinary ambition; nearly half of all yards gained; more than entire international teams often achieve in a match.

This is a strength; but Wasps made it a weakness as Connacht turned over way too many times and their back three were especially guilty with seven turnovers. Considering their style and the power of the Wasps video nerd, aligned to the quality of the Wasps players, Connacht’s back three were exposed. This has always been the risk and Connacht have to fix this.

One way is to narrow the back three’s ambition (kick more, counter less), which I hope doesn’t happen. Then there’s adjusting the Connacht forward 2-4-2 spread across the pitch to support the back-three carriers or adjusting the point of contact. Surprisingly, Connacht lacked real zip in all aspects of their performance, which for long periods looked stale and formulaic. This, too, will change at home.

Wasps have too much quality and their video nerd influenced how they defended Connacht’s lineout and running style. Aly Muldowney and Robbie Henshaw are a loss and, if fit, Stacey Ili will need a massive improvement on last weekend in both distribution and defence.

Muldowney’s loss is contrasted to Joe Launchbury’s lineout management against Connacht, allied to Kearnan Myall’s athleticism in the air. Connacht were forced into awkward lineout calls – look at their third. Five malfunctioning lineouts and a missed penalty goal in the opening quarter was bad. But it was the manner that was very worrying, given that Tom McCartney is superb out of touch.

The fifth loss was especially poor as Connacht had shortened their lineout (good option). However, watch the confusion and subsequent lift by Quinn Roux on John Muldoon. He hit Muldoon on the hips losing at least three feet on Muldoon as the ball sailed over. No fault McCartney but terrible from Roux. McCartney’s lack of options is very fixable and one major advantage of an immediate rematch.

But my greatest concern will be the last 15 minutes when Wasps’ resources can strangle Connacht’s. But I’m convinced that Wasps are vulnerable to the Connacht they’ll face on Saturday; an improved lineout, vastly reduced turnovers and increased Connacht ‘zip’. Indeed, all is far from lost.