Gerry Thornley and Liam Toland react to Ireland finishing an excellent November series with a 27-24 win over Australia in the Aviva Stadium. Video: David Dunne 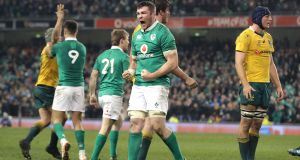 Maybe the measure of this autumn series was the arrival of Peter O’Mahony onto the pitch on 61 minutes. Or maybe it’s the fact scrumhalf Kieran Marmion more than survived way out on the right wing. Or maybe it’s that the 10, 12, 13, 14 axis was totally replaced, patched up and remained competitive.

But O’Mahony is a window into the heart of what they’ve become. For some time he’s been the pillar around which Munster and Ireland have been built, yet even he had to wait and wait and wait until eventually getting the nod. And boy did he deliver; that steal on the deck at 78:40 to finally kill Australia was one such impact. But he was not alone.

Josh van der Flier deservedly won man of the match but it could so easily have gone to Garry Ringrose. I was continually fascinated by how he entered and dominated heavy traffic. The obvious one was his try but on every single occasion when taking on bigger men he would firstly hunt for the possible weak spot of the tackle, eke out every inch, whilst getting his eyes up to locate a support runner before deciding to offload or not.

Failing all that, he has the wonderful ability to suspend time as he’s hitting the deck whilst adjusting his upper body to the perfect picture for his support runners. In the knowledge that Michael Hooper and David Pocock were loitering, this body shape put the Wallaby backrow a further couple of feet away from a steal.

Yes, I know Ireland limited Hooper and Pocock’s breakdown steals but we must still admire the wonderful talent that these guys are; especially Hooper. Do take time out to watch what he does around the ball, off the ball and in support of the ball. At times he plays as a seven but often as a trail running winger and is supremely comfortable as a first receiver; not the truck-it-up type but a creative outhalf.

His support lines and communication remind me of Pat O’Hara, who would often, if memory recalls, shout “apple” as he arrived onto the shoulder of his team-mate. This would instantly give confidence to the carrier to offload to a better position. 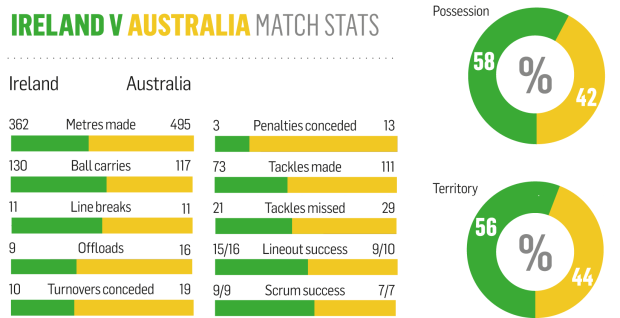 Time and again Hooper picked the most wonderful lines of support; I’d lose myself in watching just him as he’d adjust from out to in to arrive on the gainline onto a most unsuspecting Irish defender. Then he’d revert to the more traditional support lines with equal results.

In truth, Australia will be very disappointed. They left at least two tries out on the park where the ultra-talented Israel Folau ignored overlaps or Tevita Kuridrani didn’t quite get it away. When the mood took them, they were sublime going forward.

They will also be most vexed by Jérôme Garcès on the whistle. His interpretation of Sean McMahon on CJ Stander off the 75:15 scrum as O’Mahony entered from a clearly offside position was huge. It was some contrast to the previous Saturday where Garcès was intolerant of the Wallaby breakdown and of their chippy talkbacks: “I trust my team, you trust yours.”

Garcès interpretation for Ringrose try as Rory Arnold was hip checked by Devon Toner was worth another look. But he did spot a wonderful Southern Hemisphere breakdown play that I’ve discussed at length here in the past.

On 50:09 the entire Aviva Stadium went mental at the sight of Conor Murray firing a pass to Rory Best with none other than Pocock standing there too. “Offside,” they called.

Maybe we’ll revisit the breakdown laws but homework till then. When is a ruck formed? What are the offside laws around a ruck versus a tackle area? Pocock was spot on and so too Garcès, who had to be extremely vigilant to spot the legal action of the Wallabies.

Two weeks in a row now Ireland have faced a team down to 14 men for 20 minutes. And on both occasions they struggled to maximise possession. And again wayward kicking; kicks that were too long or went out on the full were punished by quality counter-attacking teams. This is extremely good news because if Ireland can compete against the best in extraordinary circumstances whilst making poor(ish) use of possession, then anything is possible over time. Ireland spurned the first three kickable penalties to go down the line.

On all three occasions they failed to get anything. Dean Mumm’s selection was vindicated at that second lineout steal from Ireland. Mumm started in the middle but his lifters floated him forward to intercept the ball; it was wonderful skill. But Mumm’s influence took a turn when he dumped Tadhg Furlong onto his head. I’m perplexed. Is this not a red card? What was Keith Earls sent off for against Glasgow? If anything, Earls was tackling a player in motion but Mumm had a static target.

Ireland’s evolving defensive system under Andy Farrell proved fruitful throughout, such as Earls’s tackle on Dane Haylett-Petty on 20 seconds. Murray, as noted on Friday, spends more time on the edges defensively and pounced for a penalty steal. As these opening minutes evolved and as the injuries mounted, I wondered whether the absence of Seán O’Brien was going to be the difference. But then Simon Zebo entered and with it a whole range of possibilities.