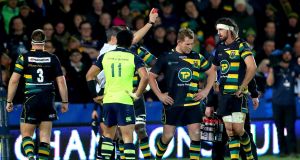 Rugby has always been a game of sliding doors. What if Dylan Hartley had started for Northampton in the Champions’ Cup game against Leinster last Friday night, rather than steaming in off the bench with a point to prove? Would he have administered a swinging arm to the head of Sean O’Brien in a Test-match arena, where his recent disciplinary record is good? Would there have been as much fuss if he was not the current England captain and a potential contender for Lions captain?

Questions, questions. What we do know is that Hartley would have made his life far simpler had he kept his right arm uncocked. A six-week ban feels fair enough: a five-week suspension for the offence with two weeks added for his chequered previous record and one taken away for his guilty plea. Both his captain and his director of rugby agreed it was a red card on the night, as did the BT Sport pundits Lawrence Dallaglio and Brian O’Driscoll. “Stupid” and “reckless” were the words O’Driscoll used and, even allowing for O’Brien falling slightly, it was hard to disagree.

The affair also complicates Eddie Jones’s job, just when everything was going swimmingly on the England front. Hartley will be available again on Monday 23 January which makes him available for the Six Nations but this leaves him desperately short of match practice before the opening fixture against France. Unless England release him from camp to play against Leicester at Welford Road – a nice, gentle prospect – in the Anglo-Welsh Cup the following weekend, he will have had precisely six minutes of competitive rugby in two months. It may be that Jones retains him as squad captain but has little option other than to start someone else against the French.

Hartley’s timing was poor in every sense. Even as his disciplinary case was being conducted, World Rugby issued a statement reiterating the law governing illegal high tackles is to be tightened at all levels from 3 January. There are also to be two new categories of dangerous tackle – reckless and accidental – whenever a player makes contact with the head of an opponent, even if the tackle “rides up” having started below the line of the shoulders. A tackle to the head deemed reckless will incur either a yellow or a red card and, if the latter, a minimum entry-point sanction of four weeks. World Rugby, clearly keen to avoid any potential lawsuits, has indicated it is taking a “zero tolerance” approach and “aims to change the culture in the sport to ensure that the head is a no-go area”.

Coincidence? Hardly. Not everyone in rugby, though, seems to have noticed the hardening official mood. Several also rushed to Hartley’s defence before his hearing on the basis that it is unfair to penalise an England captain for something that happened on club duty. Hello? He was still playing rugby, still representing his sport and, above all, himself. A top modern international sportsman, like it or not, has to be vigilant at all times or risk the high-profile fallout.

The argument for domestic bans not applying to Test matches is also wobblier than it looks at first glance. Let’s imagine if a revised system was in place: it would mean Elliot Daly, for example, still being banned for England for the start of the Six Nations almost three months after committing the offence for which he was red-carded against Argentina. Imagine someone caught biting for his club who then turns up the following week, in the whiter than white shirt of England, to score the winning try.

Hence the rationale for bans being served immediately. The problem is that one man’s gratuitous stiff arm is someone else’s mistimed tackle. Rugby people are used to such frustrations but, occasionally, they really should lift up their heads and consider how the rest of the world perceives their sport. Concussion is a massive deal in rugby right now and the more that can be done to prevent it and safeguard players the better. So when World Rugby, as it did last month, makes clear high, reckless challenges will attract stricter punishments what part of that message is either unclear or something to be ignored?

Showing support for Hartley as an individual athlete, let us be clear, is absolutely legitimate. He led England brilliantly this year, handled the off-field duties impressively and remains a loving father and family man. But imagine if it had been O’Brien’s stiff arm that had flattened Hartley from behind, removing him from the field at the end of a year in which he has already suffered head knocks of his own. Imagine if O’Brien had already been banned for 54 weeks in his career? Would people be saying the Irishman was unlucky or unfairly dumped on?

Sliding doors and all that. But if Hartley is unfortunate to have become the sole prism through which some naysayers perceive rugby union, the image of the sport has taken another unnecessary hit. The 30-year-old, as a result, is just one more thuggish act away from career oblivion, even if Jones continues to back him this time. If or when a 50-50 selection call goes against him in 2017, Hartley will have few grounds for complaint.