Ulster winger regaining his confidence after a prolonged spell on sidelines 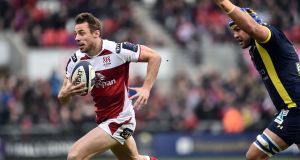 Tommy Bowe on the move against Clermont Auvergne at the Kingspan Stadium in Belfast. Photograph: Oliver McVeigh/Sportsfile via Getty Images

When the ball fell out of the Belfast sky for Tommy Bowe last weekend and he tapped it back for Iain Henderson to lance Clermont, there was a sense the old Tommy was back. His GAA high-ball fetch was trademark and vintage.

A penalty had been indicated. Ruan Pienaar saw his winger waving and played the advantage with a crossfield transfer to Bowe just about on the try line. It was perfect for Henderson’s glory.

“It’s always nice to throw one to the big man,” says Bowe. “Hopefully he can give me an offload this weekend.”

Bowe is likeable. The fans see an honest broker, an ordinariness to his personality, someone devoid of conceit or swagger.

Those traits do not make him better at rugby. But it’s a misunderstanding to think of Bowe as always seeing the glass half-full, especially after a year where his damaged body and a brand new knee kept him on a tight leash.

He agrees he is in a happy place, and more after beating Clermont in Kingspan Stadium. But his current sense of wellbeing stems from a natural sense of being up and running in Europe, not full head of steam yet, but back in the bosom of top-level rugby.

“A lot of times you are stuck in that gym looking at the four walls and feeling like it is never going to end,” he says. “Days when your knee isn’t feeling good and you just kind of wonder is it worth it any more.

“When you are injured you are not a very nice person to be around. It’s hard. Other people see the tough times.

“Whenever you get out there and do a sprint on the pitch and not be troubled with a sore knee . . . to come away with a win, it 100 per cent makes it worth it, makes it good in your mind.”

It was November 2015 when Bowe suffered a posterior cruciate ligament injury during Ireland’s Rugby World Cup quarter-final defeat to Argentina. It took 10 months to get back, and in his own mind, as well as that of Joe Schmidt who overlooked him for the November international series, he’s not fully there just yet.

As ever, he speaks collectively in a ‘who is Tommy Bowe but part of the team kind of way’.

“Our defence, we were a little bit disappointed with. We held off a bit; there were times we could have gone up in their faces a little bit,” he says.

“We were happy to drift off and give them easy yards. Once you give a team easy yards, you keep going backwards until you are over your own try line. So we can’t let them get over the gainline because we’ll be chasing shadows all day.”

As Bowe sees it, Clermont have a pack that can arm-wrestle with the best and a backline with pace and verve. They can drill a tight furrow of scrums and mauls, they can throw it around to stretch Ulster wide or they can mix it up.

In Belfast they felt the home side were to be picked apart by running at them. That didn’t work, although with Clermont playing at home the same game will be run with the crowd at their backs. Bowe played there with Ospreys. He knows the drill.

“The stadium is right in the middle of the town, so super atmosphere, super ground,” he says. “They showed they can squeeze you, eke out those tries. If we want to go over there and win, we have to attack, attack, attack.”

Now it’s is a form issue for Bowe, not a body problem. One stems from the other but he’s more peacefully at home with what he must do as Schmidt looks towards another Six Nations campaign and Ulster towards the knockout phase in Europe.

“After the match I was as happy as I’ve felt in a long time,” he says. “From my own game point of view, I’m getting there. I’d like to get a bit more ball in my hands. I’d still like to get more passes, try to take people on. I feel my speed and feel sharp but I need to work a bit more in trying to be in the right place to get the pass and try to get away.”