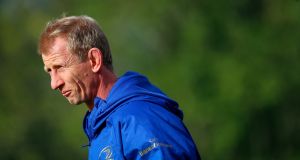 “We farmed in Newtownmountkennedy and I’d be moving ponies or sheep and I’d ask Leo, from a young age, to give me a hand. He always said yes but he wasn’t much assistance most of the time. He’d disappear and then reappear with a rugby ball in his hand. He’d ignore me in favour of the ball; chasing it, bouncing it, kicking it. That would be the start of my memory of the rugby, rugby, rugby. No matter what he did he had a ball in his hand or on the end of his foot.”

Paula Cullen, mother, speaking at a lunch alongside Brian O’Driscoll’s parents before both men retired in 2014.This month three years ago Leinster and their young head coach stalled at an ominous crossroads: Leo Cullen’s legacy, it was noted, would be comparable either to Brian Cody’s unending tenure with the Kilkenny hurlers or Steve Staunton’s chaotic stint as Republic of Ireland manager.

As Christmas 2015 washed over the rugby landscape his appointment looked premature, ill-advised even. The Staunton parallels seemed apt as he became increasingly irate with the line of questioning following each defeat.

Great player, poor manager was the easy narrative based on four poundings – Wasps, Bath and Toulon twice – in Europe.

The impression hardened that Cullen, Girvan Dempsey and the rest were out of their depth. Now, the 40-year-old is front of house spokesman, back office grinder and so much more besides.

Don’t take our word for it.

“The head coach is the key really,” Leinster operations chief Guy Easterby told The Irish Times in October. “Leo is the figurehead of the organisation. He is in the media every week. Why wouldn’t the head person want to be on top of everything?”

The Leinster hierarchy remains suitably vague. What we know is only what we see and are told. Easterby negotiates player contracts. Mick Dawson is CEO. Peter Smyth runs the academy. The game plan is designed by Stuart Lancaster with Felipe Contepomi’s arrival having a succession feel should the Englishman be lured home or he should he follow Joe Schmidt’s path into the national forest.

Cullen does coach, his obvious area of expertise being the lineout, but most of his time is consumed by overseeing “everything”. This is the lesson learned after surviving the tumultuous season that followed an enormous risk Dawson and the board took in the summer of 2015: the sacking of Mattie O’Connor.

That decision left Cullen’s career in rugby and Leinster’s potential to regenerate on a knife edge. Nobody else would take the job on such short notice. Cullen stepped up knowing full well he was unready and seeing the difficulties down in Munster.

Leinster and Munster were both, suddenly, all-Irish coaching tickets with Kurt McQuilkin – a Kiwi by birth but an Ireland international by the grace of residency – the senior figure in a very callow group.

Munster’s master plan failed abysmally. Deep-rooted problems were evident due to an inability to bring players through from clubs and schools. At least Leinster knew what was coming. There are well-documented financial problems in Munster but Rassie Erasmus arrived for a single season to sketch the blueprint of modern success.

Leinster and Cullen looked and learned but they were left flapping in the wind post the 2015 World Cup by what seemed a knee-jerk call to remove O’Connor. Everyone looks like a genius now, but the opening four rounds of 2015/16 Champions Cup were grim and the figurehead of the organisation was in the media every week with the same unconvincing message. He persevered but each interaction exposed his inexperience.

He is hardly naive regarding such situations as his father, Frank, formed Cullen Communications in 1985, where younger brother Owen is now managing director.

“It was only six or seven games in at that stage [as a head coach],” Cullen laughed about returning this afternoon to face Bath at The Rec. “It takes a while to change, it takes a while and you guys aren’t always that patient. You expect it [success] straight away, but it takes a bit longer.”

He exudes control because the recovery to this point inside three seasons has been nothing short of sensational.

Cullen and Johnny Sexton were two of a handful of people who firmly believed Lancaster was a great rather than good coach. How wrong the English media, RFU and players proved to be. But it was Cullen who sought help when McQuilkin returned home during the 2016 preseason. He had trusted Blackrock teammates, Smyth and Emmet Farrell, in staff jobs but the need for a coach capable of making world class players better was stark.

Schmidt being the standard, enquiries were made about Tony Brown, the former All Black outhalf who is compared to a young Schmidt in New Zealand, but he followed Jamie Joseph into the Japanese project.

Great leaders are natural delegators. As Cullen was learning other tools of his trade – having been fast-tracked straight from player to forwards coach and within a year to overlord of Leinster’s fortunes – Lancaster instantly made the team better. Mending strained relations with Schmidt and David Nucifora – O’Connor’s parting gift – made Irish rugby more streamlined.

Controlling the message, week upon miserable week, took heat off others but the coach’s job in rugby nowadays looks like a poisoned chalice. Even Schmidt walks away in 11 months time for a singular reason – to see his family.

“What I really miss is the 6.30am arrival into Leinster every morning,” said Isa Nacewa, “walking straight into Leo’s office to chew the fat. He was always there. People are seeing Leo Cullen mature into a top coach but he was exactly the same person three years ago.

“To me, his perspective on the game, that ability to see the big picture, was evident when he was being hammered in the media after defeats to Toulon in his first season in charge. Leo stayed the course, knowing what talent was coming through, what additional coaching elements the club required and how a unique environment like Leinster is always going to struggle post World Cup.

“The same Leo could be found behind his desk after those agonising semi-final defeats [in 2017] as he was a few days after returning from Bilbao with the European Cup. Same man adapting to situations and planning ahead. Before most people wake, Leo is working away on what’s best for Leinster Rugby but people don’t see that. How could they?”

Cullen keeps his circle of trust Robert de Niro tight, that’s always been his way, so this week’s painkiller revelations clearly annoyed him.

“Thanks Drico,” he sarcastically declared after the media briefing was not dominated by his favourite filibuster, selection headaches, but a teammate since they were teenagers spilling the beans on mass consumption of Difene and co-codamol pills by “mostly senior players” up to 2014.

Every medal Brian O’Driscoll won with Blackrock and Leinster was alongside Cullen. One of them is a former player who coaches, the other a former player now entrenched in the media. Cullen made the difference very clear when coolly steering the most successful organisation in the history of Northern Hemisphere rugby out of choppy midweek waters.

Of course, he remembers December 2015 like the living nightmare it became, because the past is where his wisdom, always far beyond his years, is rooted.

In Blackrock this unusually tall but skinny haze of blonde could be picked out across the acres of grass. Cullen was a dynamic number eight until height and career longevity forced him into the second row. He wasn’t always the captain but by Ireland U-21s a natural leader of men had emerged. A few seasons in the slipstream of Martin Johnson’s dominant Leicester Tigers era polished the sculpture.

Home he came to Leinster and so began the trophy gathering (just after he became club captain when Michael Cheika felt it wasn’t feasible for O’Driscoll to balance national and provincial leadership roles).

It’s no coincidence that the dip in Leinster fortunes coincided with Cullen upskilling on the art of middle management; a problem solver for modern Leinster in its current shining glory.

“The group is so different now and in such a different place,” he smiled when 2015 was brought up, comfortable in the Cody rather than Stan persona.

“It’s hard to compare but always worth remembering.

“Certainly, I remember those days well.”