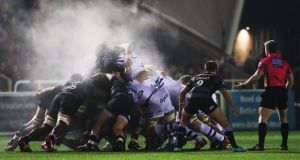 Newcastle were trying to sign an emergency tighthead in order to avoid the possibility of uncontested scrums against Edinburgh. Photograph: Ian MacNicol/Getty Images

Newcastle are facing the possibility of having to play the majority of Friday night’s European Champions Cup tie against Edinburgh with only 14 men, because of an injury crisis at tighthead prop.

They have named their squad to face Edinburgh with David Wilson picked to start at tighthead, despite fitness concerns over the former England international. Trevor Davison, who does have some experience of playing at tighthead, has been named on the bench but he, too, is an injury doubt. Newcastle said on Thursday that Jon Welsh, Craig Mitchell and Paul Mullen all suffered injuries in a 24-hour period this week.

If one of Wilson or Davison is fit to play but there is no tighthead cover on the bench, Newcastle would start with 15 men but would be reduced to 14 – and all subsequent scrums would be uncontested – if and when that player leaves the field, meaning if he were to pick up an early injury it would be disastrous.

Newcastle were on Thursday night trying to register another tighthead with the tournament organisers, European Professional Club Rugby, but if they are unsuccessful the club believe they could even have to take the unprecedented step of fielding a depleted team from the start at Murrayfield, with uncontested scrums taking place throughout.

As part of their team announcement Newcastle issued a statement in which their director of rugby, Dean Richards, said: “We are in dialogue with EPCR to try to resolve the issue and that communication will continue.”

It is believed EPCR is unlikely to grant Newcastle their request to register another tighthead, because the window to do so has closed. There is a procedure in place for exceptional circumstances to be heard but giving Newcastle the green light to select someone outside their 41-man European squad would require approval from all stakeholders and that is highly unlikely to happen. It would also set an unwanted precedent over player eligibility.

Regulations state each club must nominate a squad of 41 with a minimum of 10 capable of playing in the front row. They also state there must be at least six in a match-day squad and that “where uncontested scrums are ordered due to the departure of a front-row player and there is no suitable replacement, the player whose departure caused the uncontested scrums may not be replaced (ie the club will be required to play with 14 players).”

The stumbling block appears to be that, while EPCR rules also allow for clubs to nominate further front-rows, known as Emergency Front Row players, who can be registered on a match-by-match basis, Newcastle would have needed to provide details of that player to the tournament organisers by 20 September. EPCR also said on Thursday night there is no possibility of the match being postponed. Newcastle have won their first two Champions Cup ties in their first season back in the competition for 14 years. They followed a historic away win in Toulon with a dramatic victory over Montpellier and are top of Pool Five, two points above Edinburgh.

Compounding matters for Newcastle, their England back-row Mark Wilson has been ruled out with an ear infection, joining Kyle Cooper, Sean Robinson, Nemani Nagusa, Michael Young, Will Welch, Will Witty, Josh Matavesi and Joel Hodgson on the injury list. Toby Flood and Niki Goneva are also missing from the 23-man squad, while John Hardie was not registered as an additional player to face the club from which he was suspended and then released last season, having arrived at Kingston Park only in late October. – Guardian service