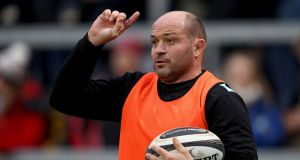 As far as they can Ulster have loaded their team for their round three trip to Wales, although, maybe not as much they would have liked.

Iain Henderson, Will Addison, Rory Best and Jacob Stockdale are included as Ulster seek to break a worrying historical run in West Wales. They haven’t beaten Scarlets in Llanelli in their last four European meetings.

Out of sorts Scarlets have lost their opening two games of this season’s campaign, the same record they had going into round three last season, after which they won five games in a row to reach the semi-final.

But Scarlets are not the same force this time around. With Wayne Pivac moving on to the Wales job in July to replace the departing Warren Gatland after the 2019 Rugby World Cup and this week the club welcoming the signature of Super Rugby Champions and Crusaders coach Brad Mooar, there has been some unsettlement.

Last week their match against Glasgow in the Pro 14 was a case in point. Having received a red card early on in the first half Glasgow found themselves down to 14 men. But it was the conference leaders that walked away with the victory keeping Scarlets out of losing bonus point territory too.

Best, who will equal Andrew Trimble’s club record of 71 European appearances, will captain the Ulster side and will be joined in the front row by two Dubliners Academy prop from Templeogue, Eric O’Sullivan and Castleknock’s Marty Moore.

If the weather in Wales is poor that could be an area Ulster could struggle. Coach Dan McFarland has thin cover for the secondrow and frontrow and is without lock Alan O’Connor (ankle) and prop Andy Warwick (knee) for this week’s trip.

Ulster’s backline is strong with John Cooney and Billy Burns retained in the half-back positions. Irish centre Stuart McCloskey and Addison are paired in midfield with Stockdale and Henry Speight included on the wings, giving Ulster plenty of fizz and biff.

But Ulster has had problems with discipline and turnovers and have targeted better ball retention. Two weeks ago the province suffered a 29-7 loss to Scarlets with a well below average league performance.

“Out of 30-odd games at home over the last while, they have lost at home one, maybe two, drawn two games and lost to Racing 92,” said McFarland this week.

“Racing are a pretty good side, so that’s the challenge, and that’s excellent, that’s what we want. We want challenges and we will get one again this weekend.”

On the same points, Ulster and Scarlets are in second place in Conference B of the Pro14. But Ulster are three points better off in Pool Four in Europe and in third place after a win and a loss. Must win game, how often have we heard that?

1 My favourite sporting moment: Roscommon minors restore pride to a county
2 Germany well ahead of the curve as Bundesliga gears up for return to action
3 America at Large: Hurling fan Dowling leading the fight against Covid-19
4 No Masters, so Tiger Woods battles son Charlie for green jacket
5 Conor McDonald: ‘People in fitness industry need to be careful what they put online’
Real news has value SUBSCRIBE