Leinster will expect nothing less than bonus point win in Bath 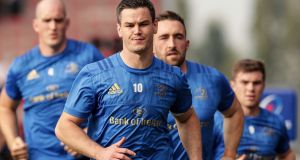 Leinster’s Jonathan Sexton in training ahead of their Champions Cup meeting with Bath. Photograph: Billy Stickland/Inpho

Kick off: 3.15pm, Saturday. Venue: Recreation Grounds. How to follow: Full coverage on The Irish Times liveblog from 2.45pm. On TV: BT Sport 2.

The surgeon’s scalpel returns from his brief mid-season sojourn in renewed form: the World Player of the Year.

Leinster soundly beating Bath at The Rec is essential and expected in equal measure. Such logic stems from the injury list outgoing director of rugby Todd Blackadder must swallow.

Squint to see dimmed lights: no fumbling Freddie Burns or Rhys Priestland so James Wilson, a 35-year-old Kiwi journeyman, is tasked with picking apart the European champions. Toby Faletau and Zach Mercer are stripped from the backrow, which does include world-renowned poachers in Sam Underhill and Springbok Francois Louw, while the backline has been severely weakened by the unavailability of Jonathan Joseph and Anthony Watson.

Names of wounded stars run deep in English rugby. It wouldn’t take a genius to realise the Gallagher Premiership is doing untold damage to its brand, never mind the fracturing of its players. Relegation fears guarantee too many vital games, too many minutes in the trenches.

Of course, Bath will offer hardy resistance or their supporters will go ballistic; atonement is demanded after last week’s awful showing in a 7-7 tie with lowly Sale.

Losing both outhalves along with the attacking ferocity of two Lions, Watson and Joseph, doesn’t make them a blunt force as Semesa Rokoduguni and Joe Cokanasiga can tear any defence asunder if afforded opportunity (both Fijian wingers are English qualified and capped).

That noted, Jamie Roberts will come stomping through midfield.

Bath do not look capable of troubling Leinster over 80 minutes. Girvan Dempsey, their attack coach since moving his family from Dublin last summer, spoke this week about building a self-sufficient organisation comparable to his boyhood team.

Factor in the clinical, ruthless nature of this Leinster XV and a bonus point is promised before the hour mark.

Take the Underhill threat. This brilliant, if injury prone, English openside hounded New Zealand in November. He will be targeted and removed from the breakdown in the same fashion that deeply frustrated Tadhg Beirne when he wore Scarlets red last season.

The Leinster backrow confirms as much.

Leo Cullen has refused to reward any recent performances. Despite the understudies amassing four bonus point victories while the internationals were breaking the All Blacks resolve, nobody survives.

Even the bench is stacked with reliables like Rory O’Loughlin.

Cullen recalls Dan Leavy, at number eight, perhaps to counteract the double openside threat of Bath, despite the growing presence of Caelan Doris, while Jack Conan returns but only to the bench as Rhys Ruddock and Josh van der Flier command the flanker slots.

Noel Reid is an interesting choice as cover for Robbie Henshaw. The form selection would have belonged to Conor O’Brien but the 22 year old is another forced to bide his time despite powerful showings in the Pro 14.

This is a huge moment in Reid’s heretofore unfulfilled career. Roberts will come for him and Sexton.

It’s impossible to label this as Leinster’s best XV because Scott Fardy is absent. The Wallaby – and they will surely come calling before next year’s World Cup – is left out of the squad entirely despite his outstanding displays in recent weeks, masquerading at second row while doing the devilish chores of a blindside.

Fardy’s exclusion is a needs-must scenario as Jamison Gibson-Park provides scrumhalf cover for Luke McGrath because the Munster-bound Nick McCarthy is injured. James Lowe’s inclusion makes it two Australian/New Zealanders in the group, with a third not permitted under European rules. Gibson-Park is Irish qualified next season.

The return of Devin Toner and James Ryan can hardly be seen as a drop in standards after the Irish pair man-handled the gold standard locking partnership of Brodie Retallick and Sam Whitelock three weeks ago.

That gap between games is the real test for Leinster. This gang has not played together, certainly not in blue, since October but this is the new way; Sexton, Garry Ringrose, Tadhg Furlong and the other world beaters are only rolled out for season-defining matches.

This represents just that because defeat to Toulouse, by both sides in October, makes Champions Cup progress very difficult for the loser.

A Leinster victory would probably ruin any hope of a competitive return leg at the Aviva next week as Bath would surely refocus on avoiding relegation trouble from the Premiership. They have Christmas games against Wasps and Leicester to worry about.

Only the expected wind and rain can deny a bonus point victory.