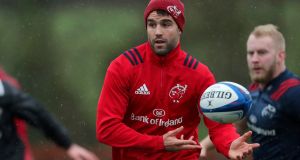 Munster’s Conor Murray is set to start and partner Joey Carbery for the first time for their Champions Cup Pool 2 clash with Castres. Photo: Laszlo Geczo/Inpho

Kick off: 1pm, Sunday. Venue: Thomond Park. How to follow: Full coverage on The Irish Times liveblog from 12.30pm. On TV: Live on BT Sport.

It may be the sleepy Sunday brunch shift in most venues, but not here, and Thomond Park will be in its customary state of fevered expectation come the 1pm kick-off. As ever too, Munster appear well primed for a return to the competition they have done so much to define, and which has done so much to define them.

Having flexed their pecks and stretched their wings in last week’s rout of Edinburgh, as expected Johann van Graan recalls the last two pieces to what is a first-choice selection barring injuries, notably to Jean Kleyn.

So it is that CJ Stander and Joey Carbery return, and as if decreed by a superior power, the latter who finally partners Conor Murray for the first time in Munster red to further heighten the crowd’s hopes.

Munster looked virtually transformed by Murray’s presence, service and speed of pass, and the extra second or so afforded the outside backs was reflected by five tries for the on-fire wingers, Keith Earls and Andrew Conway. Throw in a brace by Chris Farrell on his full return, and Mike Haley’s classy interventions, and Munster haven’t looked so potent all season.

Almost everything points to another home win, almost unnervingly so.

Whereas Munster have advanced from the group stages 17 times in the last 20 years, for Castres domestic priorities have led to 13 pool exits in 14 campaigns, and the one and only time they have advanced to the knockout stages was as far back as 2002-03, when Munster beat them in the semi-finals.

They say familiarity breeds contempt and as that semi-final was amid four successive pool rivalries, there was a river of bad blood between them back then, but even though they have met more often than any other two teams in the competition, the spite has dissipated from their rivalry in recent times.

The Castres coach Christophe Orios, who is moving on at the end of the season, appears to have named a strong hand in making just five changes from the side which surprisingly lost at home to Agen last week.

But their wretched away record in this competition, four wins and a draw in 40 games, won’t go away. They have lost 23 of their last 24 on the road, their one win being 9-6 against Glasgow five seasons ago. In 11 treks to Irleand, they have lost the lot, including six to Munster.

Castres may be tougher to crack than normal, but Munster have the cutting edge as well as the blunter fire power to do so.