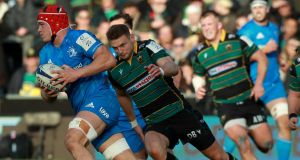 The difference – besides 27 points – can be sliced into a simple reality. Leinster thrived in the absence of their leader and most creative player Johnny Sexton, who faces a nervy wait to see how his right knee, badly jarred when tackled by Matt Proctor, responds to treatment.

The Ireland captaincy is on the line but this season shuttles onwards.

Northampton appear light years away from building a comparable dynasty. Perhaps it is impossible for an English club to ever truly compete with the Dublin-based province without committing financial irregularities.

Such a glaring imbalance will not be turned around inside a week. That lesson was learned by Leinster in December 2013. The punishment for losing to Northampton six years ago was a quarter-final in Toulon.

“And that was my last European game,” Leo Cullen remembers.

Considering Northampton will travel without four marquee players, they are highly unlikely to storm the Aviva Stadium next Saturday. Sure, they could not cope without them at home. Courtney Lawes has yet to physically recover from the World Cup final, All Black tighthead Owen Franks has a broken thumb and their big South African lock David Ribbans is also unavailable.

That head coach Chris Boyd spoke about needing to rest number eight Teimana Harrison – the Kiwi was outstanding in the first half winning three turnovers – sends out a clear festive message to the Christmas jumper parade set to descend upon Dublin 4: enjoy the yuletide celebrations safe in the knowledge that Leinster’s World Cup wannabes and fallen heroes have merged once more into what looks an unstoppable force.

Josh van der Flier pipped Jordan Larmour to the man of the match award because he was blanketing fires deep into the second half. Van der Flier was as immense in defence as Larmour was scintillating with the ball tucked under arm.

Not three minutes had passed when the incoming Ireland fullback glided outside Jamie Gibson to send James Lowe racing clear from 60 metres for the opening try.

Larmour’s side-stepping pandemonium reoccurred several times before half-time with Leinster’s poor handling on the last pass leaving the bonus point out there. They would make amends in spectacular fashion.

The dynamic duo were not alone in a feverish pursuit of excellence.

Andrew Porter produced muscular feats that promotes the 23-year-old to a select group of elite level props while Devin Toner is clearly intent on regaining a central role in the Ireland pack. Why was he left behind? Even after hearing half reasons, it still makes no sense.

Twice Toner destroyed Northampton lineouts in a manner only he and handful of tall trees can replicate.

Caelan Doris has arrived among the European men. The young number eight possesses characteristics similar to those who have travelled this path before him. Tipped for this stage since gracing the under-18 schools scene as a 15-year-old, Doris was classy and brutal in equal measure.

“Yeah, he was class, I thought he made a big difference in attack,” said fellow backrow Rhys Ruddock. “Some of his work around the breakdown, big picks and goes, carries, a real physical presence. Then, defensively, he’d a couple of turnovers and scramble efforts that proved important.”

Robbie Henshaw also earned himself a paragraph. There was vicious intent coupled with an offloading game – which he has always possessed – to remind us what Athlone’s finest sporting son is capable of producing so long as he stays healthy.

The rest of Europe are on notice. Northampton gave everything to hold pace in the opening 40 minutes but Leinster gathered more points with Porter’s scrummaging and ball-carrying power claiming the third try in similar fashion to Ruddock’s second from close quarters.

That was it. The Saints were spent at half-time. Their coach told us as much, having taken one look at his men in the “sheds” at the interval.

“You can just tell.”

Empty tanks. Not enough energy to inspire the sort of resilience needed to combat the next Leinster assault, which came immediately from the restart. James Ryan’s contribution cannot go unmentioned but Doris was phenomenal and, as Sexton was being treated, Cian Healy powered over for the bonus-point try.

“It’s pleasing that we’re not relying on one main distributor or ball player,” said Cullen. “We had 14 men that were still going all-out attack and to have that killer mentality is important. It was a massive part of the game. No one was looking around. They were sticking to their task and Ross Byrne comes on, kicks a conversion and then scores himself.”

Thereafter the 2018 champions welcomed the bombardment all these brave Saints could muster before unleashing Tadhg Furlong and Scott Fardy, Ed Byrne and Luke McGrath, upon Franklin’s Gardens for an end game that brought the rout up to seven tries.

It was chastising, but there was a general acceptance of reality around this classic rugby ground that everyone was witnessing the general order of European rugby.

“There are only three or four sides that can genuinely take their game to near Test-match level,” said Boyd. “Leinster are certainly one of them.”

1 Gordon D’Arcy: If Farrell can tap into our self-worth, we’re all on a winner
2 Winds of change as Ireland name a refreshed team, picked on form
3 Who is Caelan Doris? Meet Ireland’s newest rugby star
4 Nike Vaporflys won’t be banned but regulations will tighten
5 Seán Moran: Election fever a reminder of the GAA's fertile political soil
Real news has value SUBSCRIBE