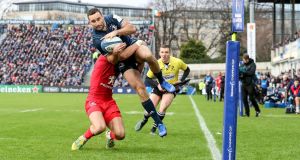 As their historic double demonstrated, last season Leinster didn’t just have the best team in Europe but the best squad.

This handsome bonus point win reminded us that this still applies. Even without a cast of stellar names, nine internationals were sidelined, this was simply the performance of champions.

It also put the other four-time winners’ recent renaissance in perspective. The threat of the relatively slight Toulouse backs, with their sleight of hand, pace and footwork, always bubbled underneath the surface, as was evidenced by Cheslin Kolbe’s try.

By then though, the clock was in the red and the die had long been cast, as Leinster showed that the best form of defence is attack. A winning machine no matter the personnel, they ground Toulouse down with their remorseless carrying and recycling.

It wasn’t always pretty but it was mightily effective. Rhys Ruddock and Jack Conan led the way with 20 carries apiece, and when each of your starting tight five also carries into double figures, there’s a fair chance you’re going to win.

Even Ross Byrne (11 carries) showed a willingness to take the ball into contact from the off, while amid the bombardment of straight running, the outstanding Garry Ringrose and Jordan Larmour provided the more elusive threat.

It was hard going. Toulouse can defend too and gave them nothing for free, albeit their own ball retention was undermined by a surprising number of handling errors, notably when Yoann Huget fumbled Roman Ntamack’s switch pass after piercing the blue line.

But having muscled over for one try through one of their multiple phased attacks through Conan, Ross Byrne finally unveiled one of his trademark crosskicks for a fine finish by Dave Kearney, and after Sean Cronin deservedly dotted down again, Leinster became the first side to score a try against Toulouse in the final quarter when Jamison Gibson-Park provided something different with a quick tap and floated double skip pass to the relatively underused Adam Byrne.

Toulouse had not been beaten since a second string, reduced to 14 men, lost to Montpellier in September and this, Cullen admitted, was one of the more satisfying wins under his watch.

”I think I’d butterflies about this game for a long time, regardless who was going to be playing in it, so. When we watched the round two game unfold, we knew it was going to be ‘we’ve a lot of work to do now’; it was like you get a second chance in the pool, but that’s it, really. That’s it.”

“We’ve been nervous for a while,” he admitted, “since literally that Toulouse game, in many ways, because of the threat of Bath, coming back off the November Tests, getting guys up to speed, and getting through the interpros.”

Wasps gave Leinster a record beating on the same weekend three seasons ago, and despite not having qualification on the line, ended Ulster’s hopes a year ago with a 26-7 win. Cullen admits he will be nervous again.

“There’s the threat they have in their squad, they’re on mixed form, at the moment, it’s fair to say. They’d a good win against Northampton last week, you could see by the celebration at the end how much it meant to them, how much they were celebrating little wins in the game, and they’re trying to build that energy. You look at that team on paper, they’ve an unbelievable squad of top end quality.”

“You just need to prepare accordingly because we saw first hand ourselves over there that if you get it wrong you can come unstuck very badly. So we’ll make a good plan, see what sort of players we have available and make some calls in terms of selection, and move on from there.”

You looked at the Leinster team and bench before kick-off and despite their injury woes it was still packed with good players. But the absence of Johnny Sexton, Robbie Henshaw and Rob Kearney from the spine of their back line underlined the importance of Garry Ringrose.

He has been playing wonderfully smart and effective rugby consistently all season for province and country, and here he oozed leadership with the strength and variety of his carries (15), as well as his defensive leadership (ten tackles).

One loose pass stood out simply because Ringrose’s mistakes are so rare.

“Yea, he thinks a lot about the game,” said Cullen. “He understands the pictures, he’s improving all the time and giving us a good voice, particularly defensively, but in attack he’s added a few different layers to his game as well.”

“He’s just working hard, he studies the game well and he’s still very young but he has built up a lot of experience over the course of the last few seasons so hopefully he’ll continue to improve.”

No-one set the tone more than Sean Cronin, who raced off the tail of a Toulouse lineout in the early exchanges to make a rib-tickler on Thomas Ramos, who hadn’t been helped by being forced to reach high for a loopy pass by Antoine Dupont. Cronin pumped the air, the crowd roared and teammates’s slaps nearly put his back out of place.

The hooker has, by all accounts, been devoted to his training this season more than ever.

“He’s working hard on his game, so there’s no magic secret to success really,” said Cullen. “He’s probably had to deal with some frustration during the course of the season, or during the course of his career, and this season he’s very focused, very clear on what he wants to do. He’s got an eye for scoring tries.”

He sure does. This was Cronin’s 36th in 165 games for Leinster, but tellingly his ninth in a dozen games this season, already four more than in any of his previous seven campaigns.

4 Different Strokes: Hatton aiming to bring A game to Majors