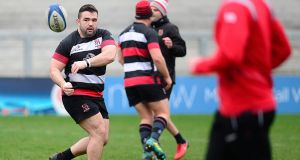 On TV: Live on BT Sport

What’s seldom can indeed be wonderful. These two have only met once before but judging by that first meeting last October in La Defense Arena, when only attack mattered, then this should be fun.

In their round two meeting, true to Dan McFarland’s word, Ulster died with their boots on. They made more line breaks (17-12) and offloads (18-11), in a game where Racing beat 32 defenders and Ulster 27. It was that kind of encounter.

With Billy Burns and Finn Russell again pulling the strings this is liable to be similar, but plenty of factors point to it being much closer.

First and foremost, Ulster will play in front of a packed Kingspan Stadium, and this competition repeatedly demonstrates how home advantage matters. To further stoke up the atmosphere before kick-off, 10 years on Ulster’s 1999 European Cup winning squad will be introduced to the crowd.

Although Ulster roared into a 12-3 lead in Paris, thereafter they were grievously handicapped by their scrum. Effectively, Racing scored 27 points off their dominance there, and they also stole three Ulster lineouts.

Yet Ulster’s scrum has improved immeasurably since then, helped by the emergence of Eric O’Sullivan, as well as Marty Moore’s run of games.

Furthermore, Camille Chat and Cedate Gomes Sa are now sidelined, as well as one of Racing’s try scorers that day Teddy Thomas.

Not that the Parisiens don’t have firepower. They have one player who has made 48 carries, 220m, seven line breaks (joint seventh in the tournament), nine offloads (fourth) and beaten 15 defenders (sixth). Remarkably, he’s their out-half, and Russell has also chipped in with 44 points – with a 86 per cent kicking ratio compared to John Cooney’s 63 per cent.

In Virimi Vakatawa, Juan Imhoff and Simon Zebo they have players in top form. Zebo has developed the kind of understanding with Russell that he once enjoyed with Conor Murray, and not having given up on his Irish hopes, will again want to make a point.

Zebo shifts to the wing as Brice Dulin returns in one of three changes from last week’s win over Agen, with Maxime Machenaud returning at scrum-half and Ben Tameifuna replaces Gomes Sa. Donnacha Ryan is still sidelined.

Antonie Claassen and the offloading Leone Nakarawa, aka Mr Octopussy, will also give them go-forward momentum unless Ulster can contain these two.

Ulster have developed a good team under Dan McFarland, and much more quickly than might have been reasonably expected. McFarland recalls 13 players rested from last week’s defeat by Leinster, with only Alan O’Connor and Sean Reidy retained, and the fitness of Jacob Stockdale, who has scored in every round and will win his 50th Ulster cap, is huge.

On the other wing their exciting 21-year-old Sevens flyer from Enniskillen, Robert Baloucoune, will make his Euro debut after four appearances in the Pro14.

The 10-point haul against the Scarlets has earned them a real shot at qualification for the knock-out stages for the first time in five seasons. Topping the pool remains a long shot. They’ would need a bonus point win by a margin of 33 points or more to go above Racing on the head to head.

Yet a win here and again in Leicester next Saturday would guarantee a place in the last eight. Even a defeat, especially with a bonus point, would not scupper their chances.

Possession will again be a key factor, and the absence of Iain Henderson is a blow. Although Marcell Coetzee and Stuart McCloskey can take up the carrying mantle, they will still miss Henderson’s carrying, tackling – particularly his choke tackling – and his lineout skills.

Recall Johann van Graan’s description of Racing’s defensive lineout as one of the best two in the world, along with the All Blacks, and how that was borne out in last season’s semi-final.

Leone Nakarawa, Wenceslas Lauret and Baptiste Chouzenou pose a huge threat to the Rory Best throw, and with a reasonable supply of ball Russell, Zebo and co can dissect any defence.

Furthermore, few teams come back more motivated than the beaten finalists. Their Top 14 form has been patchy, but Racing have reserved four of their best performances for Europe.

They know that a win here would secure qualification while setting up a home game against the Scarlets with which to secure a top two seeding. Racing look like a team on a Euro mission.

Seated areas of the stadium are completely sold out for the fixture, but a limited number of terrace tickets are still available at ulsterrugby.com/buytickets.