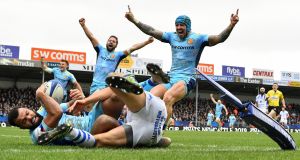 Exeter kept alive their Heineken Champions Cup quarter-final hopes with a 34-12 bonus-point victory over Castres at Sandy Park on Sunday.

But the English Premiership leaders still face a Herculean task to progress, needing victory over twice European champions Munster in Limerick next Saturday.

Unless they beat Munster at Thomond Park – and deny them a losing bonus point, or collect a five-point maximum – Johann van Graan’s will win Pool Two.

Castres’ replacement prop Tudor Stroe was sent off midway through the second half for a swinging forearm into Chiefs centre Ollie Devoto’s head.

And although wing Taylor Paris and centre Thomas Combezou scored tries for Castres, with flyhalf Benjamin Urdapilleta adding one conversion, Exeter were good value and deservedly maintained their European dream.

Exeter showed a number of switches from the side which beat Bristol last weekend, with England back Nowell headlining the changes following his recovery from a hamstring injury.

And it took Nowell just three minutes to stamp his class all over the contest, cutting Castres’ defence apart as he claimed a memorable 45-metre solo try.

Nowell, making his first appearance since England’s victory over Japan in mid-November, gathered possession from the base of a ruck, then sprinted into space and brushed aside three attempted tackles as Exeter enjoyed a dream start.

Simmonds drifted the conversion wide, but the Chiefs were off and running as Castres’ brittle confidence surfaced on the back of losing three French league games from their last four outings.

But their response was impressive, as far from going into their shells, they hit back with an equalising try just four minutes later, with Canada international Paris rounding off a slick passing move to cross unopposed.

It was a shot across Exeter’s bow, yet they regained the lead approaching the end of a lively opening quarter.

A strong attacking scrum provided a foothold, then it was all about Devoto, who teased Castres’ defence with his footwork before finding Simmonds through a stunning one-handed off-load that allowed the flyhalf an easy finish.

Exeter relished the space afforded them by a lacklustre defence, and they claimed a third try 10 minutes before half-time following patient work by the Chiefs’ pack that ended with Hill collecting scrumhalf Nic White’s pass to cross unopposed.

Exeter, though, were in charge at the break, holding a 12-point advantage and looking eminently capable of adding to their tally.

And Slade made amends for his error, by creating Exeter’s fourth try through a superb break and cleverly-placed kick that O’Flaherty scooped up at pace to score.

Simmonds converted, and although Castres replied with Combezou’s touchdown, Slade continued to shine by finishing impressively for another Exeter try, before Cowan-Dickie completed an emphatic success.

Replacements: Kockott for Radosavljevic, Firmin for Tichit , Stroe for Jenneker (all 41 mins), Clerc for Kotze, Jelonch for Gerondeau, Tulou for Vaipulu (all 52), Vialelle for Ebersohn (54), Mafi for Jacquet (61). Sent off: Stroe (59).

1 My favourite sporting moment: Roscommon minors restore pride to a county
2 Germany well ahead of the curve as Bundesliga gears up for return to action
3 Stephen Kenny: ‘I want people to come and look forward to watching this team’
4 No Masters, so Tiger Woods battles son Charlie for green jacket
5 America at Large: Hurling fan Dowling leading the fight against Covid-19
Real news has value SUBSCRIBE